This week, we discuss an episode of NBC's The Tomorrow Show With Tom Snyder from its final year. Tom sits down with BOTNS returning star Ricky Schroder. Iggy Pop performs three songs, bleeds a little, and chats with Tom. Plus "economist" Jerome Smith warns of impending 1980s doom, and "poet" Dorothy Greene-Pepper talks about loooove while Tom just tries to talk. Sit back, fire up a podtini, and chortle along with a broadcast legend (Tom, not us). 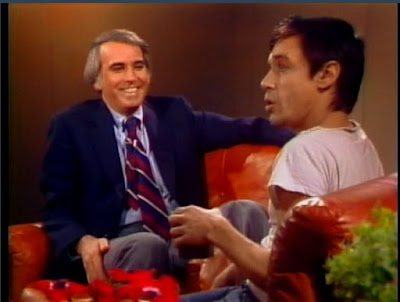 We've had a YouTube page since almost the beginning, featuring play lists related to each episode "curated" by our very on Rick. Now we've started adding full episodes of the podcast. So far, we have all of season one available, but seasons two and three will follow soon(ish). If you're new to the podcast, catch up*. If you're a regular listener, revisit some of your favorite episodes, and either way, share, share, share.

*All episodes remain available through Libsyn, our RSS feed, Apple Podcasts, Tune In, Stitcher, or wherever you get your podcasts.

Below, one of our favorite episodes "Let it be Lowenbrau." 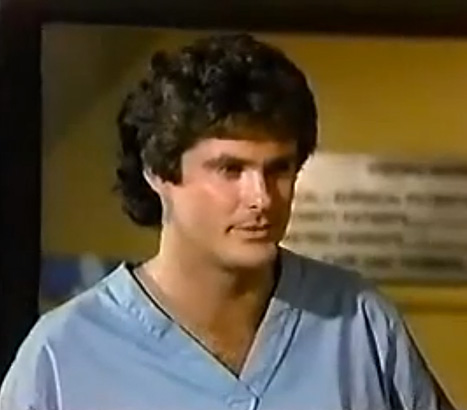 *Check our YouTube channel for this episode's playlist, which includes a sweet custom Knight Rider pinball machine in action.
Posted by Rick Brooks at 6:00 AM No comments:

Cool, cool, cool! Master of cool Michael Knight gets into a spot of trouble when his cool talking car K.I.T.T. gets car amnesia and wanders into the wilderness. Luckily for them, cool kid Doug (Jason Bateman) finds K.I.T.T. Oh, and some dudes are trying to blow up a dam or something. 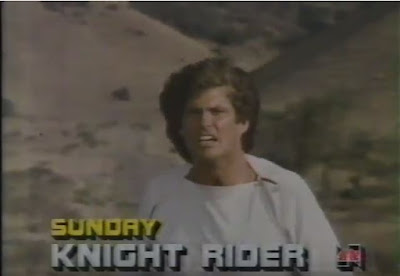 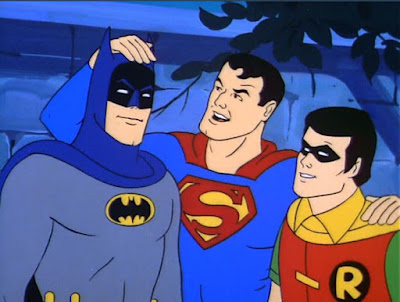 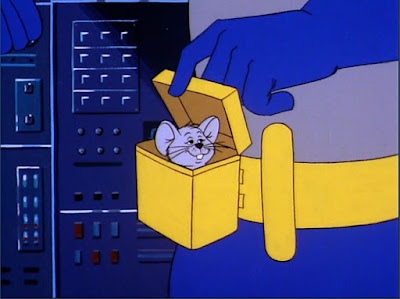 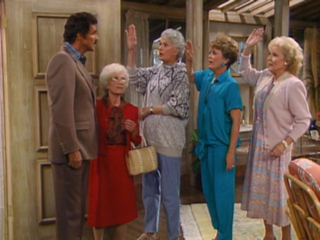 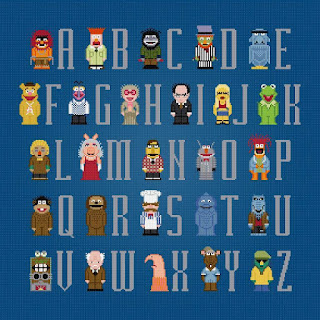 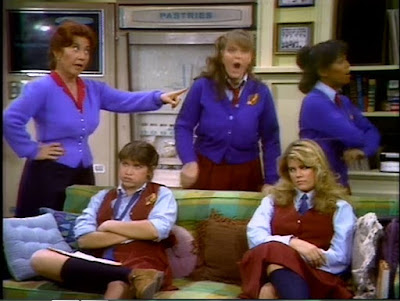 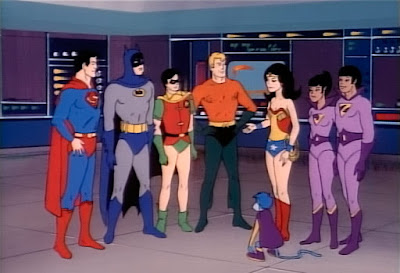 With the Justice League movie arriving in theaters, we sell out again, this time talking about the animated and friendly adventures of the Justice League from 1977 in The All-new Super Friends Hour. Yes, you get Superman, Batman, Wonder Woman, and even Aquaman, but you also get Robin, the Wonder Twins Zan and Jana and their space monkey Gleek, and Native American hero Apache Chief! Plus safety and health tips, craft segments, and the hard-to-beat Decoder. Also, the Secret Four, an escaped tiger, time travelers, and giant cobras! Holy buffets, Batman! What didn't they include? 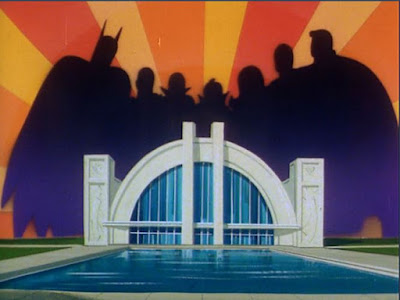 *As we mention in the pod, Tubi TV (free, ad-supported) and BritBox (subscription) have all episodes available for streaming.

*"Decision by Committee" is episode 3 of series 2.

*Greg Rucka's Queen and Country comic book series, which inspired Mike to seek out Sandbaggers, ran 32 issues and was followed by several miniseries and novels.

*Click HERE for our look at the Amelia Earhart controversy as portrayed on the, er, original version of In Search Of.

*The Ops Room website devoted to The Sandbaggers is here.

*Vince Gilligan, showrunner of Breaking Bad and Better Call Saul, is NOT, as far as we know, Ian MacKintosh.

*The SIS (Secret Intelligence Service/MI6) was established in 1909. MI5 is the domestic intelligence unit of the U.K.

*Author Brendan Koerner (The Skies Belong to Us) identifies 1968-1972 as the "golden age" of skyjacking, with over 130 in that period alone. In 1973, new security regulations for passengers took effect and began to reduce the incidence as the decade continued.
Posted by Rick Brooks at 6:00 AM No comments:

Email ThisBlogThis!Share to TwitterShare to FacebookShare to Pinterest
Labels: Show Notes, The Sandbaggers

Episode 3-4: The Sandbaggers "Decision by Committee"

This week, we look at The Sandbaggers, a classic British espionage series from the late seventies. Action takes a backseat to palace intrigue and political maneuvering as Director of Operations Neil Burnside (Roy Marsden) tries to rescue his primary operative from a hijacked plane. One of us compares this one to the prestige dramas of today, plus we offer "startling" evidence about the whereabouts of missing and presumed dead show creator Ian Mackintosh. NOTE: "Startling" means completely made up.

Posted by Michael Cowgill at 6:06 AM No comments:

Email ThisBlogThis!Share to TwitterShare to FacebookShare to Pinterest
Labels: Podcast, The Sandbaggers 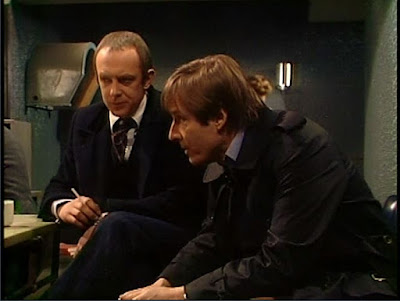 *Celebrity Bowling was syndicated, but best we can tell, this episode (Leslie Nielsen and Susan Saint James versus Angie Dickinson and Lloyd Bridges) premiered April 30, 1975.

*The series is on Amazon Prime and YouTube but no longer on Hulu.

*McMillan and Wife was part of NBC's Mystery Movie wheel from 1971 to 1977 and starred Saint James, Rock Hudson, and Nancy Walker (plus John Shuck, who is also mentioned in this episode). Hudson was a San Fran police commissioner.

*Joe Forrester  was a spinoff of anthology Police Story (produced by David Gerber, who also did Police Woman). It only lasted one season (1975-1976) on NBC.

*Leslie Nielsen was in a "frequent guest star" phase, appearing in numerous one-shots and recurring roles all over the place at the time.

*Jed Allan played Don Craig on Days of Our Lives from 1971 to 1985 and had shorter stints on General Hospital and Lassie. He was Steve Sanders' demanding father Rush on Beverly Hills 90210.

*Cheryl Kominsky (now Robinson) is a Hall of Fame bowler who, as this profile puts it, "brought a charismatic charm and movie-star looks to a ladies’ tour dogged by the perceptions of female pro athletes that prevailed at the time. " I still think she could have explained the best ball format better, though.

*The social theory we refer to on the podcast is the "social capital theory" developed by Robert D. Putnam and explained in his 200 book Bowling Alone. According to Wikipedia, He has described the reduction in all the forms of in-person social intercourse upon which Americans used to found, educate, and enrich the fabric of their social lives. He argues that this undermines the active civil engagement, which a strong democracy requires from its citizens. Bowling is just one example of the forms of "social intercourse" that have declined. See also fraternal organizations, Girl and Boy Scouts, veterans groups, etc.

*Evander Holyfield was a former Cruiserweight and Heavyweight boxing champion, while Paul "Mr. Wonderful" Orndorff was a pro wrestler whose career peaked with a big feud against Hulk Hogan in the WWF.

*Dan August was a Quinn Martin series on NBC 1970-1971. Check out the awesome opening in our YouTube playlist for this episode.

Celebrity Bowling: seventies celebrities strive to strike in a modified and slightly confusing version of the Sport of Kings! Leslie Nielsen and Susan Saint James face off against Angie Dickinson and Lloyd Bridges. What's not to love? You can almost smell cigarettes and fried food from here, and you never know who might stop by (hint--an Oscar winner!) We picked the wrong week to stop using our Amana Radar Range. 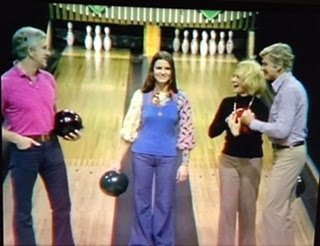