*"Demi-God," the second episode of season 6 of Medical Center, premiered September 16, 1974, on the CBS television network, airing against What Happened to Helen? on NBC and the Bills playing the Raiders on the season premiere of Monday Night Football.

*Medical Center aired 1969-1976, peaking as the #8 prime time show in its second season. The complete run is on DVD and streaming through Warner Archive.

*The People article Rick mentions is right here. McKenna tanked on ABC in the 1994 season; only 5 of 13 episodes aired. Jennifer Love Hewitt co-starred with Chad Everett.

*Marjoe Gortner started preaching at 4. He was in his mid-20s when Marjoe was filmed; that documentary won an Oscar after premiering in 1972. His acting debut came in the pilot movie for what became Kojak.

*Meredith Baxter, who of course appeared in our first season as Elyse Keaton, was 27 when this aired and had starred in Bridget Loves Bernie. She went on to be a regular on Family in 1976, but first she returned in the final season of Medical Center as a different character than the one she plays in "Demi-God."

*IMDB lists no other Marjoes, but there is a producer named Marjoes Corsten.

We give our diagnosis of Medical Center, a mid-70s version of that TV staple, the medical drama. Erstwhile and well-dressed Dr. Gannon (Chad Everett) wants to do his job and help a young woman (Meredith Baxter), but she believes in her faith healer husband David (BOTNS fav. and ex-evangelist Marjoe Gortner!). David's father Harmon urges them to have faith...and keep the machine going...but will medicine or faith ultimately save the day? Find out this and more, but mostly listen to us talk about ~MARGOE~! 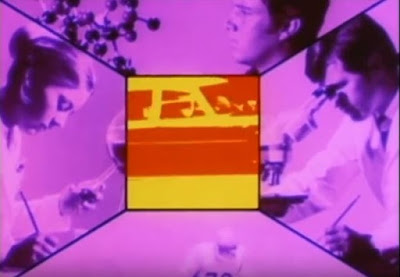 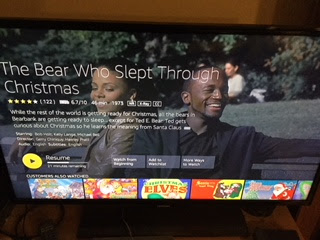 Holiday Special: "The Bear Who Slept Through Christmas"

The holidays mean holiday specials--or they used to--and we present second one. Tommy Smothers plays nonconformist Ted E. Bear in "The Bear Who Slept Through Christmas." While the rest of bear society hibernates, Ted wants to stay awake and go to Christmas. Does his dream come true, or does he succumb to the norms of bear society and biology? We get to the bottom of this and risk the ire of the Big Bear lobby by blowing the roof off its secret plans. Listen if you dare! 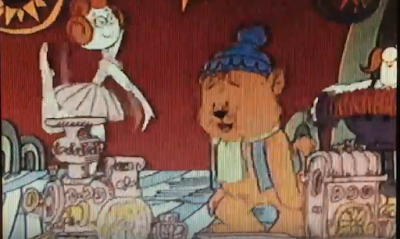 *Jon-Erik Hexum was only 26 when he accidentally took his own life on the set of the short-lived series Cover Up.

*The episode mike mentions with the trial is episode 13, "The Trial of Phineas Bogg."

*We found no evidence of the Voyagers interacting with dinosaurs during the show's run.

*Lucky Luciano allegedly started modern organized crime in the USA and was likely responsible for countless murders. He's a lot of fun in this episode, though! Oddly enough, despite dozens of arrests, Lucky never served actual jail time.

*The 1927 Yankees went 110-44, destroying the American League, and swept the Pittsburgh Pirates in the World Series. 5 other players besides Babe Ruth are in the Hall of Fame, and so is the manager and then-exec Ed Barrow (who we see in a different role in this episode).

*The makers of Baby Ruth candy bars always claimed they named it after Grover Cleveland's daughter, but they launched it in 1921, and as Wikipedia notes, the manufacturer was on the same street as Chicago's legendary Wrigley Field.

*Isaac Newton's theory of gravitation may or may not have been directly inspired from an apple actually falling and plunking him on the head, but isn't it a better story that way?

*Mike was spot on in referencing the Babe's piano. Legend has it that an intoxicated Ruth heaved a full upright piano into Willis Pond in 1918. The New England Historical Society reports the other version of the story is that Ruth and a bunch of his drunk friends just pushed it in together and left it because it was too heavy to pull out when they sobered up.

*Speedy with Harold Lloyd and an extended cameo by Babe Ruth is a 1928 silent film.

*Shannen Doherty appeared in "Agents of Satan," which took the Voyagers to colonial Massachusetts for the witch trials and to Harry Houdini.

*We give a special shout-out to the comprehensive website https://www.voyagersguidebook.net/ and recommend if you want to learn more about the show, visit your local library...but then visit this website. (NOTE: Updated to give the URL of the new and improved version of the site!)

This week, we discuss one-season wonder "Voyagers!" Time traveler Phineas Bogg (Jon-Erik Hexum) and 12-year-old Jeffrey (the ubiquitous Meeno Peluce) try to set history straight in a rollicking adventure that features Cleopatra, Babe Ruth, Sir Isaac Newton, and Lucky Luciano! What brings these disparate figures together, how will the Voyagers turn the light from red to green, and how do we manage to squeeze Harold Lloyd into it? Find it all in a book--er, on Battle of the Network Shows! 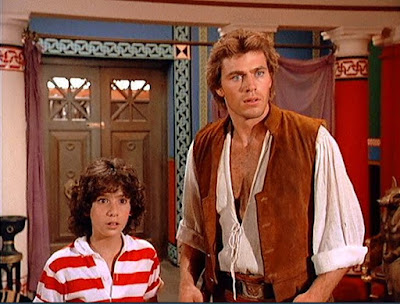 *The New York article that inspired the series can be found right here.

*The series won a whopping 18 Emmy awards, including the top prize for comedy show in 1979, 1980, and 1981. It also won a Humanitas Prize, which sounds pretty impressive, doesn't it?

*Co-creator Edwin B. Weinberger went by 'Ed." from the age of 8 according to Variety via Wikipedia, and in the same article he said it was "an affectation that got out of hand."

*Louie DePalma was TV Guide's pick for the best TV character of all time in a special edition of the mag in 1999.

*Jeff Conaway was 29 when this episode aired.

*The closing title card for the John Walters Company (the production company created by 4 ex-MTM producers, including James L. Brooks and Weinberger, and funded by Paramount), featured the line, "Good night, Mr. Walters," followed by a weary harrumph. Weinberger plays the fictional "Mr. Walters" in the segment. The other notable show the company produced was the short-lived sitcom The Associates, a 1979 legal comedy with Martin Short that reran on A&E in the 1980s. 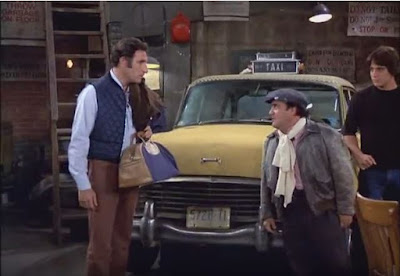 *Tomorrow lasted from 1973 to 1982, but this Tomorrow Coast to Coast phase began in October 1980, as the series moved up from 1:00 to 12:30 (The Tonight Show went from 90 minutes to 60 minute) and added Rona Barrett and a studio audience. Snyder didn't like the new format, nor Barrett, reportedly, and the show ended in first run in December 1981, then aired reruns until David Letterman took over the time slot with Late Night.

*Dan Aykroyd did his Snyder impression 12 times on Saturday Night Live according to Wikipedia.

*The "tini" thing with Snyder began when he went to CNBC in 1993 and started calling his show the "colorcast." He went from inviting the viewer to fire up a colortini to calling for a "simultini" when he took over The Late Late Show on CBS in 1994.

*Ricky Schroeder starred in The Earthling with William Holden, which was produced in Australia and barely released in the USA. Learn more about The Ricker in our Silver Spoons episode.

*Iggy Pop, born James Osterberg, was 33 at the time of this episode. The Stooges, inducted into the Rock Hall of Fame in 2010, had disbanded in 1974,

*Jerome Smith's The Coming Currency Collapse and What You Can Do About It has a Kindle edition! One Amazon reviewer apparently thinks this 1980 book was written in 2004.

*Gene Shalit was Today's movie critic from 1973 to 2010. It's unknown whether or not he commented on monetary policy in any of his segments.

*Dorothy Green-Pepper gave an L.A. Times correspondent a psychic reading of some kind in 1986, and you can read the story here.