*In this week's episode, we look at the premiere episode of Battle of the Network Stars, which aired at 8:00 P.M. on November 13, 1976, on the ABC television network.

*Highly recommended: this Mental Floss piece we mention on the show, "A Brief History of" the series.

*"The diminutive Gary Burghoff" is reportedly 5'5".

*The Quest was a short-lived 1976 Western series co-starring Kurt Russell and Tim Matheson.

*Gemini Man was a short-lived 1976 NBC series with Ben Murphy, previously the star of Alias Smith and Jones, as a secret agent.

*Reggie Jackson, AKA "Mr. October," hit 563 home runs in a distinguished Hall of Fame career. After this appearance, he moved to New York and became an even bigger star as a Yankees slugger.

*Rona Barrett was appearing in ABC specials at this time as well as making regular appearances doing gossip and celebrity interviews on Good Morning America.

*U.S. Olympian Mary Decker failed to finish the 3000 meters in the 1984 Olympics after colliding with Zola Budd.

*Gymnast Cathy Rigby starred in the 1968 Olympics, then entered acting, where she became famous for playing Peter Pan on stage.

*Dr. Joyce Brothers was a psychologist who became famous for being famous and was a guest star on...just about everything.

*Telly Savalas did indeed claim to give Howard Cosell his first TV role, hiring him when he was a producer on ABC's Gillette Cavalcade of Sports.

*The Superstars competitions, pitting athletes from around the world in a variety of events, aired as a series of TV specials beginning in 1973 on ABC.

Email ThisBlogThis!Share to TwitterShare to FacebookShare to Pinterest
Labels: Battle of the Network Stars, Show Notes

For our season two finale, we finally take a look at perhaps the ultimate example of the Battle of the Network Shows era, our namesake, Battle of the Network Stars. In this first-ever Battle from 1976, Robert Conrad, Telly Savalas, and Gabe Kaplan lead teams from NBC, CBS, and ABC in athletic competitions for bragging rights and a sizeable prize. Celebrities, Howard Cosell, controversy, swimsuits, short shorts, Speedos, mustaches, the thrill of victory, the agony of defeat! This one has it all!

Email ThisBlogThis!Share to TwitterShare to FacebookShare to Pinterest
Labels: Battle of the Network Stars 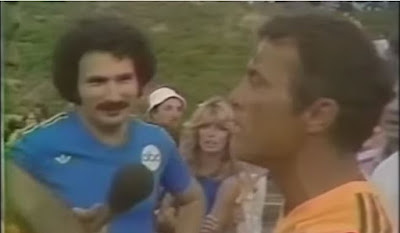 And Now...a Word from THEIR Sponsor: Jim Perry for Morton Salt

It's not difficult to envision Jim Perry as a consummate pitchman. He's so polished in all  his game show work, and his Sale of the Century stint indicates he is comfortable pushing product. One of my favorite YouTube uploaders, Bionic Disco, just posted an early Perry commercial that throws me a bit, though. He just looks so...young in this one. Check it out:

At first, I am taken aback by the haircut, but as I settle in and get past that (OK, it may have taken me a few watches), I am THERE. I want that salt.  I mean, I want that salt he has right there in the ad. I want to take that little jar and chug that Morton's Lite Salt. If this were Sale of the Century, I'd throw away $10--the value of two questions--just for a heaping portion of salt. He wouldn't even have to sweeten (or salt?) the deal by throwing in a set of shakers.

The poise, the delivery, the confidence--even in the 1970s, Jim Perry was the man.

In our recent Game Shows episode, we also played another round of "The TV Guide Game." This time, we looked at Saturday morning, October 27, 1984, from the October 27-November 2 1984 edition of TV Guide. 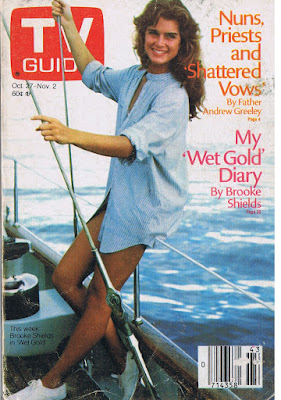 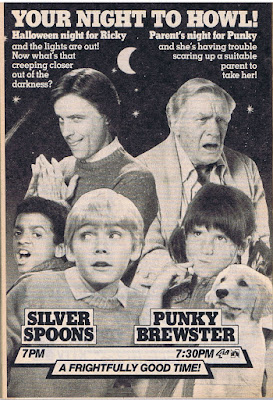 *The Face the Music episode we cover aired in syndication  in 1980; the Sale of the Century aired at 10:30 A.M. on NBC in 1985. A commenter on YouTube believes the latter aired in November.

*Jim Perry was born in New Jersey but first hosted game shows in Canada.  He was the first emcee of Card Sharks (1978-1981) but was busy with Sale of the Century and other work when the series was revised--hence the use of Bob Eubanks and Bill Raferty.

*In addition to his work on Face the Music, Tommy Tedesco was a regular on Fernwood 2Night  and of course played on countless recordings. As Mike mentions, his son Denny directed The Wrecking Crew documentary that features him.

*Renae Jacobs, a contestant on the episode of Sale of the Century that we watched for the podcast, was April O'Neil on the original Teenage Mutant Ninja Turtles cartoon series that premiered in 1987. She also starred in Masters of the Maze on The Family Channel.

*CBN was a cable network from 1977 to 1988, when it became CBN Family Channel. It later morphed into Family Channel, Fox Family, ABC Family, and is now Freeform. It hasn't aired anything like Face the Music reruns in a long, long time.

*Summer Batholomew won the 1975 Miss USA pageant representing California, edging Miss Alabama and North Carolina. She had a short stint on a version of Wheel of Fortune. A clip of that pageant is in our playlist for this episode!

*Ron Ely's stint as Tarzan on the NBC series lasted 1966-1968. Besides his acting career, he hosted several Miss America pageants

*Lisa Donovan, the vivacious singer on Face the Music, still performs, and according to her website had a stint in Nunsense in Las Vegas.

*Sale of the Century began as an NBC daytime series in 1969 with host Jack Kelly of Maverick fame, then later Joe Garagiola. After becoming a success in Australia, producers brought it to the USA in 1983, where it aired on NBC until 1989. A syndicated version also hosted by Perry ran from 1985 to 1986.

*The Get Along Gang cartoon was inspired by a greeting card line.

This week, we dive into the world of game shows with a look at the syndicated "Face the Music" and NBC's fast-paced "$ale of the Century." Plus, an all-new TV Guide Game! Will one of us go home with a brand-new car?!

Posted by Michael Cowgill at 6:01 AM 3 comments: 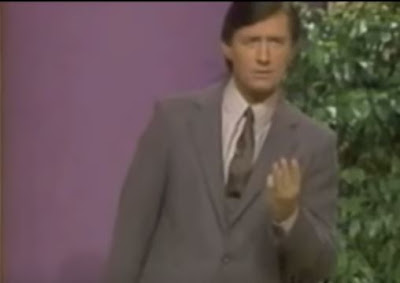 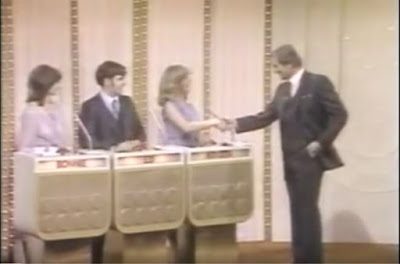 Show Notes: Episode 2-10: He-Man and the Masters of the Universe

*This episode, "Castle of Heroes," is #57 in the "first season" of the series and premiered in syndication on November 9, 1983.

*Filmation Studios cranked out animation and live action programming for over 25 years. We may well revisit more of its work in the future!

*The Mattel toy line that spawned this series began in 1981 after several years of development.  Mattel had to fight off a lawsuit that claimed the concept was a ripoff of Conan. The Princess of Power line that introduced She-Ra debuted in 1985.

*The action figures came with mini-sized comic books that introduced the characters and the universe. There was also a DC Comics series in the early 1980s.

*Skeletor (Alan Oppenheimer) apparently started out as a minion of Hordak, but much like with Darth Vader, I refuse to believe he was ever subordinate to another super villain.

*The voice of He-Man/Prince Adam is John Erwin, who did other voice work for Filmation in various Sabrina and Archie (as Reggie) series. He also had a recurring role on Rawhide.

*Hannibal of Carthage (born 247 B.C., died in the 180s) was a legendary general and renowned military strategist, not just the dude who rode an elephant through the Alps into Italy. But he did do that, which is pretty cool.

*Mattel did not make a Blackbeard action figure, unfortunately, but there are several cool figures of the historical figure, including a Pirates of the Carribbean tie-in and a "historical"one from Accoutrements.

*The real Blackbeard straddled the end of the 17th and beginning of the 18th centuries and is one of the most infamous pirates in history. He died quietly of natural causes surrounded by loved ones who sang sea shanties at his bedside.

No, actually, he suffered a violent death in battle. Doesn't that make you feel better?

*In fairness to Orko, he comes off as buffoonish sometimes in part because his powers do not work in Eternia as they do on his home planet.

*The 1987 movie with Dolph Lundgren, Courteney Cox, and Frank Langella  is indeed a Cannon production. It draws more from the toys themselves than from the cartoon, and Prince Adam is not even a part of it. According to Wikipedia, a proposed sequel was recycled for the Jean Claude Van Damme vehicle  Cyborg when Cannon had to bail due to being unable to afford the licensing fees.

Episode 2_10: He-Man and the Masters of the Universe "Castle of Heroes"

In this episode, we take another look at the animated toy tie-in phenomenon of the mid eighties with the granddaddy of them all He-Man and the Masters of the Universe. Skeletor's "friend" Monteague, a toad-like wizard, unleashes Hannibal and Black Beard on Eternia in a plot to recruit He-Man into his army and, um, take over the universe or something. Listen. He drank a bunch of martinis with his pinky before he hatched the plan. He probably doesn't even understand it. Will Monteague prevail (doubtful)? Will Orko annoy us (probable)? Will we get to the bottom of Skeletor's anatomy (doubtful, but we'll try)? Plus, a band-new game: PICK YOUR PINE. 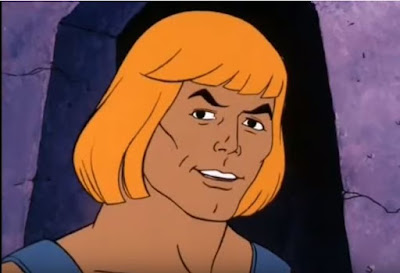 *The Diana Prince as Kind of emma peel "depowered" version of the Wonder Woman character lasted from 1968 to early 1973. Diana voluntarily gave up her powers so she could become more of a secret agent (I'm sure cashing in on the spy craze--albeit a few years late--was a nice coincidence).

*The Cathy Lee Crosby pilot movie aired on ABC in March 1974. It's not a direct pilot for the eventual series; the concept was changed after the modest success of the  Crosby version.

*The series theme song was composed by Charles Fox and Norman Gimbel, who also did the themes for Happy Days and Laverne and Shirley. Fox co-wrote the Love American Style theme with Arnold Margolin.

*Wolfman Jack (1938-1995) did indeed start on a blowtorch border radio station heard all over the country, but he also appeared in syndication, on Armed Forces Radio, and even in New York City for a year.

*Here is the official site for the Touchdown Club, which hosted the Timmie Awards event Rick attended years ago and kind of saw Lynda Carter: http://dctouchdownclub.com/
Posted by Rick Brooks at 6:00 AM No comments:

This week in a crass attempt to cash in on the Wonder Woman movie, we take a look at the 1970s TV show and Lynda Carter's definitive performance as the Amazon princess. This one features some of our favorite discussion topics: superheroes, seventies fashion, unique guest stars, and disco. Wonder Woman has to stop an espionage ring using telepathy to steal state secrets, but she also has to survive going to a disco.