Ah, yes, Tom Selleck and Robert Pine, two actors who go together like Lowenbrau and steak. As promised on our Magnum P.I. episode, we bring you a look at Robert Pine's appearance on a very important episode of Magnum as none other than Thomas Magnum's dad...Thomas Magnum.* We've made our love for BATTY-Award ™ winner Robert Pine abundantly clear, and this episode only reinforces said feelings. 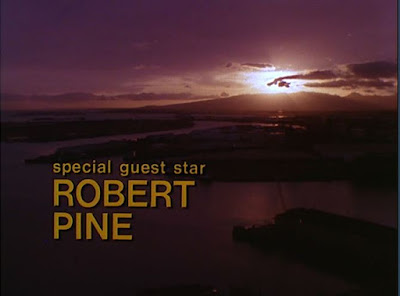 Let's get the bad news out of the way first. Selleck and Pine don't appear in any scenes together (unless you count disembodied voice-over). With these two powerhouses, however, this doesn't diminish the episode, and their performances still create a real, indelible connection between the two characters.

"Home From the Sea" originally aired September 29, 1983, as the season four premiere and squarely in the peak era for Magnum. It lands at number six on Magnum Mania's Top 40 List (seven season four episodes make this list, which technically has 46 episodes). It also marks the first in a series of three episodes set on July 4, all featuring Magnum in some kind of peril partly because, as we learn here, he prefers to spend the Fourth by himself, understandable given what this episode reveals but a little unwise given the predicaments this leads to.

The episode begins with Magnum on the ocean on his surf ski, his voice-over explaining his desire to spend the holiday alone. While he takes a breather, a speed boat whips past him, its wake capsizing him, and the waves carrying his surf ski away. Magnum gives them a peace of his mind, but of course, they still don't notice him. 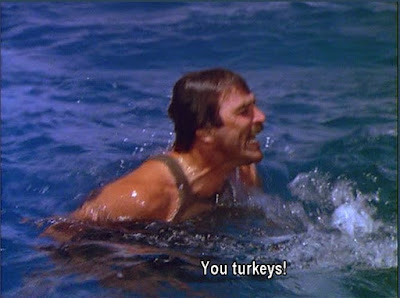 It doesn't take long for him to explain the potentially dire circumstances. Though only three miles offshore, an easy swim for him, he could get caught in the Moloka'i Express, a fast current between the islands of O'ahu and Moloka'i that could send him all the way to Alaska! He swims in the direction he thinks his surf ski drifted, but the audience sees he's made a bad choice. 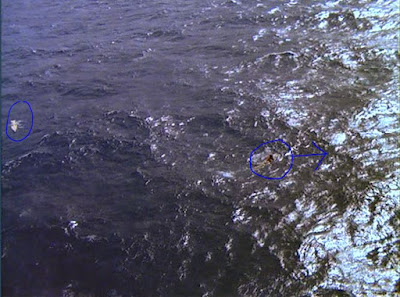 We cut away from Magnum to check in on Higgins, T.C., and Rick. Higgins wants to whip some Yankee butt in an annual polo competition. T.C. is taking his little league team to a minor league baseball game (and forcing them to sing the "cornball" "Take Me Out to the Ball Game"). Rick has taken a yacht trip with a beautiful if unsophisticated young woman in a bikini. During their scenes, they all have vague premonitions that Magnum's in some kind of danger, and T.C. even remembers a Fourth of July when he dropped Magnum and a surfboard in the ocean.

Magnum treads water, and here we get to the meat--and the Pine--of the episode as we flash back to a beach near San Diego in 1950. A five-year-old Magnum treads water, trying to beat his own record, his dad timing and encouraging him, pushing him to work harder but with the right balance of enthusiasm and discipline, never making his son feel bad and making him feel great about his accomplishments. 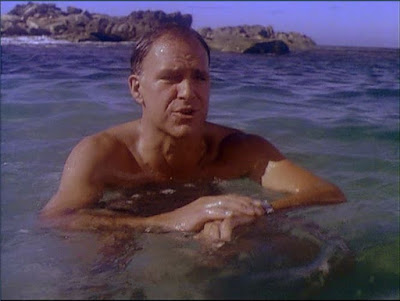 Back onshore, we see Magnum's mom, and these three make a picture-perfect family, but we learn that isn't quite the case. The elder Magnum, a Navy pilot, has to ship out to Korea soon, but he promises a watch identical to his if lil' Magnum can reach a new goal by the time he returns--treading water for one hour. 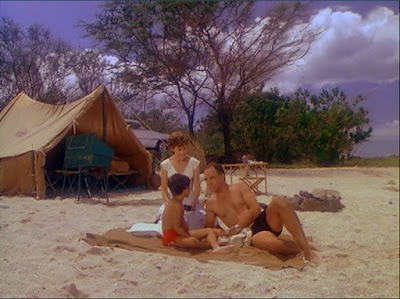 This memory gives present-day Magnum the strength to continue to tread water and fight his fatigue and fear. That fear only grows when a shark begins circling him. 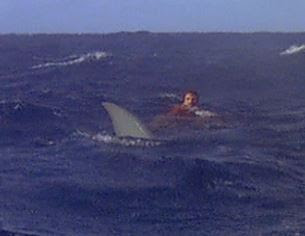 In another flashback, we see the Magnum family at night on the beach. Lil' Magnum worries about monsters, but Dad gives him some advice, telling him that if he names the monsters they won't seem as scary. They name the monster Herman and yell at him to go away. In the present, Magnum does the same with the shark...and it works! 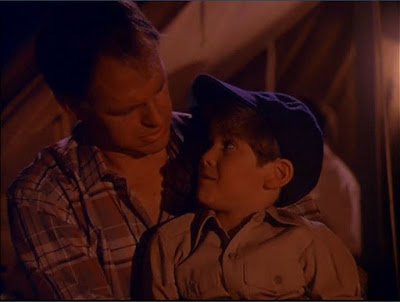 Donald Bellisario's script and Pine's performance (along with child actor R.J. Williams and Susan Blanchard as Katherine Magnum) create a believable but perfect father figure. He's a good-looking military man who encourages his son in athletic endeavors, but unlike many men of his generation, he doesn't dismiss or even discourage his son's feelings. Instead, he offers patient advice on how to overcome them. In an unspoken way, he also seems to be preparing Magnum in case he doesn't return from Korea.

In fact, he doesn't return alive. In a scene that cuts between the present and Magnum trying to continue to tread water until the sunrise and a flashback. In the past, Katherine counts down as young Magnum approaches the one-hour mark. Back in the present, T.C. and Higgins approach via helicopter (along with Rick who had unwittingly passed Magnum in the night, they've figured out the situation). Magnum's mom continues to count down. Behind her a Navy car pulls to a stop, and a man in uniform. Young Magnum nears his record. Higgins leaps from the helicopter with a life preserver, but Magnum can't stop. He needs to do it "for dad." The Naval officer stands behind Katherine. We don't hear the news, but we don't have to. In the present Magnum beats the record allows Higgins to take hold of him as he shouts, "I did it, Dad!" 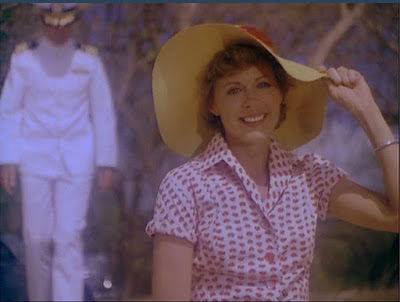 Then we get our final flashback, the elder Magnum's military funeral. It happens on July 4, 1951, and we now know why Magnum prefers to spend the holiday alone. 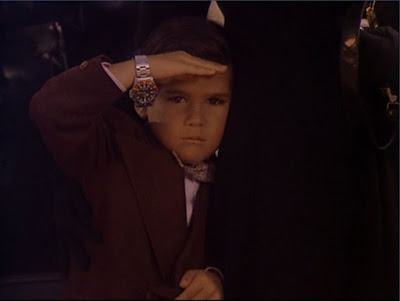 Pine, Williams, and Blanchard carry much of the episode, but not surprisingly, the regular cast does stellar work, as well. Selleck spends the entire episode in the water and has to play varying degrees of desperation, delusion, grief, hope. The others play both their concern for their friend and light comedy. Higgins gets fed up with Yanks and, as usual, remains oblivious to the romantic advances of his friend Agatha. He also tells a pretty great story.* T.C. has to deal the kids on his team, and Rick tries to play lady's man, even while questioning his date's taste in wine. We also learn a great deal about Magnum and some of the sources of both his haunted nature and his tenacious attitude. A top episode for certain and highly recommended.

*[A premonition] happened to me once before, you know, in Pakistan just after the War, Teddy Fabishaw and I. He was a young lieutenant then, good officer, but he had this uncontrollable desire to worship lizards. Cost him his commission when he was caught with Colonel Meacham's daughter and an iguana behind the regimental stables, committing what can only be described as the most abhorrent act of perversion known to man or reptile.