Further Viewing: The Facts of Life Goes to Paris 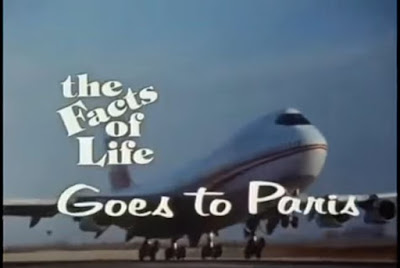 The Facts of Life Goes to Paris TV movie aired on September 25, 1982, just before the premiere of season four (our podcast covered two season three episodes). In it, Mrs. Garrett and the girls, um, go to Paris...France. I remembered watching it way back when, but frankly, I didn't remember much. They went to Paris, Jo wore a blue and white striped shirt, Jo got her heart broken, Jo cried. So I managed to rewatch it, and I can report a little more.

The movie starts off with a semi-comic scene of Mrs. Garrett and the girls barreling through the airport, spouting exposition in between bits of character comedy. Mrs. Garrett seems overwhelmed, Blair has too much luggage, Natalie has gum, Tootie keeps saying, "I can't believe," and Jo seems nervous about flying...or something. Mostly, though, they can't contain their excitement. They're going to Paris! Once on the concourse, we also learn that Jo wants to get to Le Mans, the famous car race. Also, Mrs. Garrett plans on abandoning them once they reach Paris. No, actually, she'll be attending a prestigious cooking school while the girls study abroad.

Once they reach the City of Lights, however, they find their hopes dashed. They wait for their rides, Mrs. Garrett says the hotel is "sending a car." Duly impressed, Tootie assumes she means a limo. Instead, a bit of French comedy arrives in the form of a tiny Citroën. 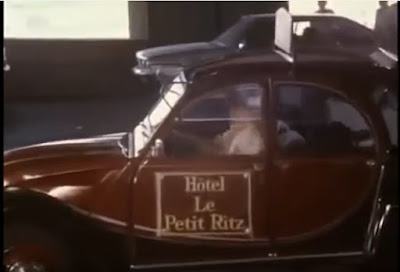 Soon, the girls meet the officious matron of their school away from school (Vivian Brown). They ride through Paris, excitedly pointing out the window at sites like the Eiffel Tower. Then they ride out of Paris another hour (thankfully not in movie time) to a spooky chateau. Meanwhile, Mrs. Garrett warbles her way through a chaotic and amusing high-speed trip to her hotel.

With the power of montage, we see everyone suffer.  Mrs. Garrett faces her snooty French teacher Chef Antoine (Roger Til), stirs incorrectly, tosses salad incorrectly, and deflates five soufflés. She also says something like, "I can't quit. If I do, I can't go back," which implies she needs this certificate to keep her job. The movie never revisits that topic. (pic)


The girls do push-ups, sleep through boring classes, and get glared at for giggling. They learn they'll get to spend their last four days touring Paris with the school, and Jo decides she's going to bolt for Le Mans, and soon, the other girls decide to bail, too.

Once the girls run (slowed down because the school has their passports, meaning Blair can't use her traveler's checks), the movie breaks into four different stories Justice League of America style: Natalie and Tootie (paired as usual), Blair, Mrs. Garrett, and Jo. Combined with the longer running time, lack of laugh track, and slower pacing, this works pretty well. The characters get some space to exist without having to hit the next punch line. Not that the movie lacks jokes, and it even takes advantage of the format change for some sight gags like this one of Tootie with a baguette. 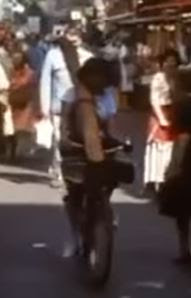 Natalie and Tootie: At first, Tootie seems like an afterthought, but she ends up playing an important role in their story. After the girls stop in to crash with Mrs. Garrett, Natalie and Tootie spend the next morning visiting the graves of famous writers--Natalie's choice. When told about visiting a cafe Hemingway frequented, Tootie asks, "Margeaux or Mariel?" (Later she knows F. Scott Fitzgerald's name, though). At a cafe, Natalie spots a hero of hers, American author Garth Kiley. Of note here, the actor playing Kiley shows up in the opening credits with the main cast, but it takes 30 minutes to see him, and I spent that entire 30 minutes waiting to see him. Robert Pine? Alas, no, but still a good second choice--the great Frank Bonner, who played Herb Tarlek on WKRP in Cincinnati. 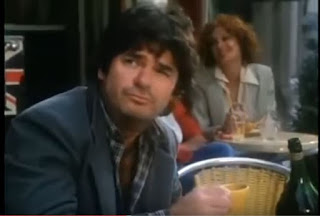 Natalie and Tootie join him at his table and soon annoy him bond with him. He tells them what they should see in Paris, they tell him to show them that stuff, and Natalie and Tootie agree that he will the next day. When they find him, however, he's hungover and working his next hangover at 10:30 in the morning. His American boss (Chip Fields, real-life mom of Kim Fields and later TV mom of Tootie on the show) yells at him about a late tour guide piece he needs to write. Tootie decides they should help him, and the girls fill him with coffee and drag him off to see Paris. Eventually, he's dragging them around. Bonner of course plays drunk and grumpy quite well, but he also plays rejuvenated well. Kiley (G.K. as the girls call him) finds his writing mojo again through the help of two teenage girls, or "child muses," wandering around Paris with him for two days. Nothing weird about that.

Blair: Nothing weird about it at all when you look at Blair's story. She has one mission--find a man. Now as a rich girl, Blair has spent plenty of time in Paris and even finds some fancy friends to stay with. Based on a dream, she has a plan, too. She goes to Sacré-Couer to sketch and snare. A very adult-looking man (see Photo Parade of Creeps) approaches her because she's changed her pose (he's been sketching her because Sacré-Couer will be there forever, but she won't). Then he suggests as artists they should first have coffee and cognac. Keep in mind, Mrs. Garrett told Chef Antoine she couldn't cook with wine because she could never serve that for her students, but I guess when in Paris (and Blair is 17 or 18, so I don't question the character so much as the show). Soon however, Blair loses interest when the guy's son and wife arrive! She seems disappointed, but she gets it when he says, "What can I say? I am French."

She doesn't give up, though. The next day, she and her rich friend spot a painter setting up shop on the street. They act all snooty about it until Blair sees the, again, pretty adult-looking guy (see Photo Parade of Creeps). Soon, they hold hands over pastries and talk about a moonlit stroll along the Seine until he reveals his real plan. Blair's friend has a high reputation in the art world, and he wants to show her some of her paintings. Blair gets it, and she tosses him back out on the street. She spends the rest of her story wandering Paris, meeting literal dogs, taking it in. She even rejects a suave, preppie American dude (Ken Barnett, Chicago). She's learned something. She likes to spend time alone.


Mrs. Garrett: Oh, Edna. Mrs. Garrett continues to struggle at the French cooking school. She doesn't even get a white hat like the men! Chef Antoine dismisses her so much that he has her doing busy work and sweeping the floors, and Rae shines as she gets more and more flustered. I don't like seeing Mrs. Garrett the character as an underdog, but, boy, I enjoy seeing Charlotte Rae play that note. 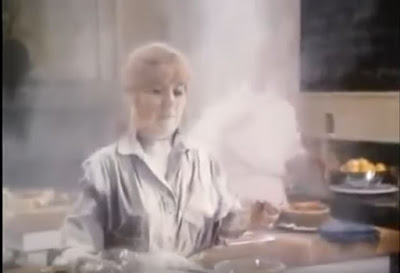 With the help of hotel owner Pierre, Mrs. Garrett eventually passes her test and gets her white hat. She even tells Chef Antoine and the class who helped her, and Chef Antoine promises to visit Pierre's little hotel restaurant and give it his Chef Antoine Seal of Approval (read in French accent). Then Mrs. Garrett and Pierre get a little frisky but probably just a little since she ends up with Natalie, Tootie, and Blair bunking in her room that night.

Jo: Oh, Jo. She heads off to Le Mans (215 kilometers, about 133 miles she tells us Americans). We don't see how she gets out of Paris proper, but we find her hitchhiking in farmland. A motorcycle passes her by, and she calls the guy a creep. He turns out to be one of the few non-creeps in the movie. Not long after, she finds him broken down, and after some bickering (he calls her an American princess), she uses her grease monkey skills to fix the bike...at least for a little while. David (Frédéric André) works in a bookstore in Paris, studies history, and seems age appropriate. He offers a ride to Le Mans, not far from his home, and off they go.

Eventually, the motorcycle breaks down again, and they walk it to a small hotel. The creepy, sniveling innkeeper (see Photo Parade of Creeps) has a room for them but--heh heh--they'll have to share. Also, it only has one bed.

David doesn't seem too worried, but Jo does, even after feigning "experience," and zips up her vest and sleeps on top of the sheets. The movie teases us with the possibility of young love the next morning as Jo wakes up under the sheets. She gets on David's case for reneging on a promise "last night," but it turns out he should have woken her up for her shift on the floor. She just wants him to treat her like an equal.

They spend the next night at his family's house, enjoying their company, looking at old photos, and by now, falling for each other. David gets a call. He has to go back to the bookstore in Paris but says his father will take Jo to Le Mans.  Jo knows where she wants to be--with him. Aw. They return to Paris, but the next day, she has to decide (mostly off camera), go home or stay. Ultimately, they agree she needs to go home, and they part ways tearfully at the airport, a curious Blair watching. In a nice moment, when they meet the rest of the gang, Blair covers for Jo, and they all head home with the same excitement they had on the way to Paris. 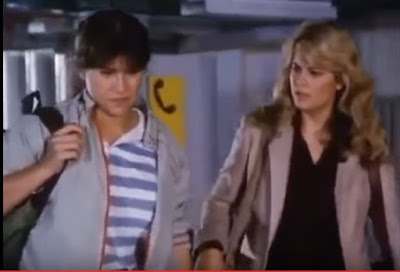 The Facts of Life Goes to Paris doesn't make for great viewing, but I found its breezy yet slightly more grounded nature more appealing than the show. I mean, nothing beats "Starstruck" for a certain kind of enjoyment, but this movie had a nice vibe. The characters got to feel more alive, Charlotte Rae got a lot to do (and sported a more free hairstyle with a bouncy ponytail), Nancy McKeon got to stretch her dramatic chops, and Lisa Whelchel got to play a more human Blair (and did nice work in those non-dialogue scenes--Paris suited her). I laughed unironically more than I did watching those other episodes, too, not just at the regulars but some of the supporting characters like that creepy innkeeper. Plus...Frank Bonner!