1) Gavin MacLeod and Marion Ross: I stumbled on a PBS My Music special devoted to showing old Christmas TV performances from the likes of Mitzi Gaynor, and it was hosted by the dream team of Captain Stubing and Mrs. C.

How many boxes does that check off on your Nostalgia Bingo card?

2) Robert Reed: I read an article in the New York Post that weekend emphasizing Reed's "diva" behavior on the set of The Brady Bunch, with the excuse being a new book about the show by Kimberly Potts. For example, Reed complained that his character shouldn't enter a kitchen and say it smelled like strawberry heaven because he had read in the encyclopedia that strawberries didn't give off a smell.  Personally, I think that's hilarious. More power to you, Bob Reed, for keeping it real.

3) The Cabbage Patch Kids Christmas: Give me one reason this isn't a perennial TV favorite?

What? You say the characters are creepy, the story is kind of lame, it's bizarre...

Hey, I told you to give me ONE reason.

4) The Facts of Life: Decades had a marathon of the show, and Roku Channel added seasons 1 and  2 back, pleasing me since I--uh, pleasing everyone who had been watching from the beginning earlier this year.

5) Hart to Hart: New this month to IMDB TV is the 1980s series about a sophisticated married couple who solves mysteries around the world. Hey, they ought to look into that Natalie Wood case. I hear that's still unsolved.


6) Good Morning, Mickey: Where's this on Disney Plus?

8) Don Johnson: The Donaissance is still going strong, with appearances all over the media promoting Knives Out and Watchmen, plus discussions of the Nash Bridges revival.  You know, the only way this comeback tour would be better is if he showed up on Battle of the Network Shows...

9) Crazy Eddie's: I can't be the only one who thinks of these ads each holiday season:


10) R.I.P.: What a horrible several days it was for celebrity deaths. We apologize for leaving anyone out, but shout-outs to writer D.C. Fontana, Rene Auberjonois, Ron Leibman, Shelley Morrison, Carroll Spinney, and Leonard Goldberg: 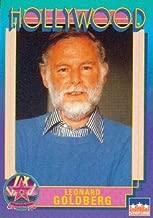