If you've listened to our Golden Girls episode (see in player above), you know we love Burt, but we also love Mickey Rooney (The Mickster going forward). In "Larceny and Old Lace" (season 3, episode 21), The Mickster pays a visit as Sophia's new boyfriend Rocco. Sophia met him at the police station while trying to identify a purse snatcher, and they hit it off. Rocco was caught spray-painting something obscene on a billboard of Spuds MacKenzie.


Dorothy doesn't much care for Rocco, and this creates a role-reversal gag throughout the episode with Dorothy playing mom to Sophia's rebellions teenager. She tells Rose that Sophia came home "with NyQuil on her breath and his surgical stockings in her pocket." She doesn't know what that means, but she doesn't like it.

Rocco certainly talks a big game. At one point, he tells Dorothy if she had a suit and a higher voice she could pass for notorious gangster Frank Nitti, and he claims to have known him, Dutch Schultz, and Al Capone. He also says he "ran Detroit." Later, Rocco shows up with a grocery cart full of his stuff (most notably a deer head and a satchel) because he doesn't have room on his apartment...or does he? 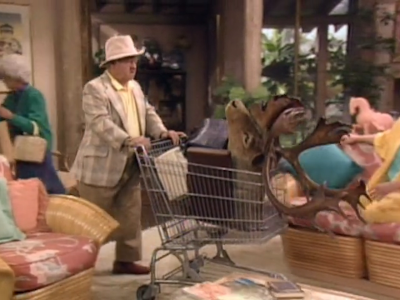 In the slightly predictable and quickly dispensed with B story, Blanche has been giving Rose an extra hard time. She found and broke into Rose's diary only to read about two awful, snoring, belching pigs. Dorothy chastises Blanche for reading the diary, but of course, she succumbs to temptation and tries to break into it as soon as Blanche leaves the room. Later, Rose catches them and rightly gets angry at their violation of her privacy, refusing to talk to them. Guilt-ridden, Dorothy and Blanche end up in Sophia's bedroom, seeking advice, and then Rose comes along and reveals the diary was her 4-H pig diary...about literal pigs. They make up.

Rocco's satchel falls on the floor, opening and dumping out thousands of dollars in cash. Sophia says they stopped by a bank earlier, and he ran out, and they know he must have held up the bank. She calls him, and he admits the truth, saying he did it for her and that he's coming over.

While they wait for Rocco, the other girls reminisce about the most romantic moments of their lives. Blanche tells a touching (but of course sexy) story about her courtship with her late husband punctuated with a stupid question by Rose and two amazing takes by McClanahan and Arthur. 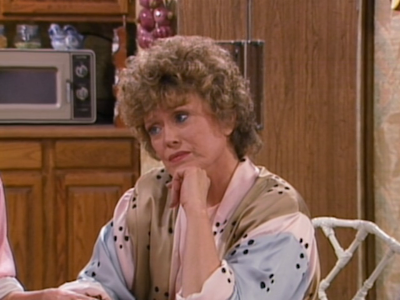 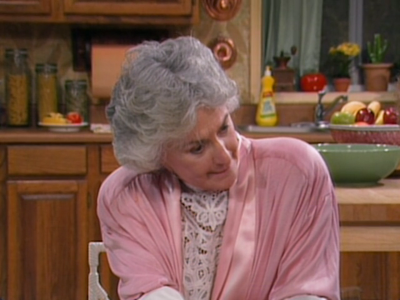 Dorothy's tells a more rough-around-the-edges story about her ex-husband Stan proposing to her. It includes a ring in a champagne glass, Dorothy accidentally swallowing it, and the phrase "three days later."

Finally, Rocco arrives, struggling to climb over the patio wall, then trying to get Sophia to run away with him. She refuses. He comes clean. He's no tough guy. He told those stories to impress her. He was an "assistant" cook at a chowder house in Bayonne, New Jersey. He robbed the bank so he could treat her like a queen. Sophia explains he doesn't need to do fancy things for her. He always treats her like a queen. They reconcile. 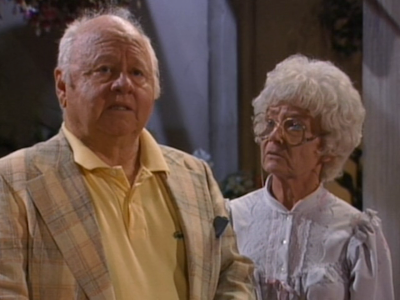 Except a mention in the last scene, Rocco never appears on the show again. Did he go to jail? Did he die? Did they just break up?

Forget it, Jake. It's Sitcom Town. 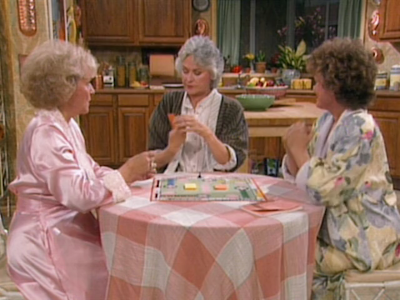