Over the years, shows like Star Trek, Gilligan's Island, The Brady Bunch, Happy Days, and My Three Sons (we wish) spun off into animated versions, and NBC went to this well a number of times in the eighties. Gary Coleman's TV movie The Kid With the Broken Halo begat The Gary Coleman Show. Mr. T got his own cartoon. Even Punky Brewster showed up on Saturday mornings in It's Punky Brewster (along with a "leprechaun gopher"). Still, none of these could top ALF, for ALFmania spawned not one but two animated series, airing Saturday mornings on NBC!

ALF: The Animated Series premiered in 1987 and showed ALF's (real name Gordon Shumway) life on Melmac before its destruction.* We met Gordo's family (dad Bob, mom Flo, little brother Curtis, and little sister Augie) plus would-be girlfriend Rhonda and pals Skip and Rick. They live in a weird, American Graffiti/Happy Days world mixed with sci-fi. I remember watching this one some, but it didn't make much of an impression, and my sampling of part of an episode for this post didn't either.

*Hey. Don't worry, kids. In season one, episode seven of the regular series "Help Me, Rhonda," we learn that at least Skip and Rhonda escaped Melmac, too. Sure, we don't know about Bob, Flo or little Curtis and Augie, but at least not everyone died a horrible, horrible death by nuclear annihilation.

The next year, ALF Tales joined ALF: The Animated Series in a one-hour ALFtastic block. ALF Tales used the cast of The Animated Series to retell fairy and folk tales. Much like "Fractured Fairy Tales" and some segments on Sesame Street, ALF Tales used the source material as a starting point for parody--in this case, movie (and pop culture) parody. ALF Tales made an impression on me, though I'd probably already grown tired of ALF proper by then (graduating to more "mature" material like Cheers and Newhart). Even not knowing all the references (and they loaded them up), I could tell the creators had something more--dare I say--sophisticated in mind. Looking back on a couple episodes, I can see hints of later smarter kid-but-also-for-adults cartoons like Animaniacs and Freakazoid! ALF Tales doesn't reach those levels, but it tries.

In "Cinderella," the creators turn the traditional story into a kind of Elvis movie. Superstar rock 'n' roller Gordon Shumway has come to town with his pompadour, Colonel, and band made up of cousins and guys he knows from the joint.

At that night's concert, he wants to pick soul mate. Rhonda plays Cinderella, whose father has just remarried (like, five minutes ago) an awful woman named Tillie, who has two stepdaughters named Janet and LaToya. Yep. Tillie and the gals also form a girl group (a very bad girl group), and when dad mentions he has tickets to Gordo's concert, they pounce. Cinderella whines to her dad, but he doesn't pay her much mind. In My Three Sons style, he spends his time in his recliner, reading the paper and smoking his pipe (two actually!). Cinderella wishes for a fairy godmother and ends up with Marlon Brando from The Godfather. She of course wins Gordon's heart with her glass-shattering voice, and they live happily ever after until fairy-tale Melmac explodes in nuclear devastation. 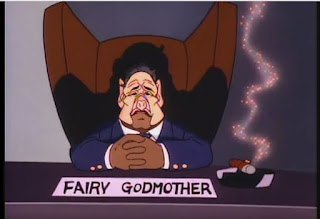 A couple other bits:


"Jack and the Beanstalk" stuck in my memory, and I've actually rewatched it a couple times. This one retells the classic tale through a Hitchcockian lens. I have to admit I have a fairly large Hitchcock-shaped hole in my movie watching even now, so I probably missed a few bits, but this episode includes references to Psycho, Vertigo, North by Northwest, The Man Who Knew Too Much, Rear Window, The Birds, and The Thirty-Nine Steps. The episode opens with a Gordon Shumway Presents title card reminiscent of the TV show Alfred Hitchcock Presents. 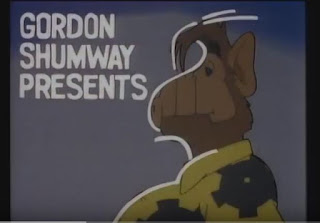 We soon learn that Jack lives and work at the Re-Bates Motel with his mother, but they haven't had a guest in twenty-six years, so she sends him to the village to sell their pet/bellhop cow.

He of course gets magic beans, she tosses them out the window, and he ends up climbing the beanstalk, despite his fear of heights. There, he finds the giant, this time named J. Mason, and, yes, he looks and talks like James Mason. Jack steals the golden-egg-laying chicken, and they upgrade the Re-Bate to a Sick-O 6. A mysterious blond named Pippi Lee Sing shows up, Jack utters this episode's questionable line, and along the way, we meet two henchmen named Martin and Landau and Rear Window Jimmy Stewart. While not hilarious, this one holds up a little better than "Cinderella," possibly because it doesn't have a long duet in the middle of it. It also features some nice Bernard Herrmannesque music. 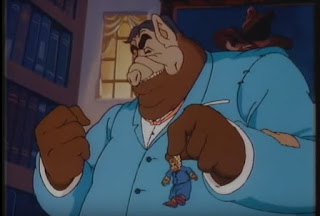 Other bits:
Where can you watch ALF Tales? Well, you can purchase episodes from Amazon, but it doesn't appear on streaming services right now. Like ALF, it disappeared from Hulu at some point. YouCould look elsewhere, YouKnow. Ahem.