Further Viewing: The Return of Bruno

The lengths we go to for our audience! In our Family Ties episode, we also discuss a number of Bruce Willis' Seagram's Golden Wine Cooler commercials and speculate a little on his "Bruno" persona and his brief music career. Well, folks, after downing a couple of bottles of vanilla extract (I didn't have any Golden Wine Coolers in the house), I watched Willis' 1987 HBO special The Return of Bruno. I expected a awful vanity project (what else would you expect when an actor starts a music career and promotes it with a 60-minute TV Special?) I found something else...a mediocre, occasionally amusing vanity project.

I don't blame Willis for taking advantage of his sudden rise to fame and living out some dreams--fronting an R&B band, making a mint off of wine cooler commercials. In 1987, Moonlighting had been on the air for a couple years, he had one movie under his belt (Bruno aired in February '87, and Blake Edwards' Blind Date premiered in late March). Willis probably had a plan and certainly had hopes, but could anyone have predicted Die Hard at that point? Why not get while the getting's good? So for embracing Willis, the world got Bruno.

Bruno uses the model of The Rutles and This is Spinal Tap to tell the story of Bruno Radolini, an unsung rock 'n' roll legend. In this case, a parade of rock celebrities appear on Rock Heroes, a rockumentary show hosted by none other than Dick Clark, to mostly praise Bruno. This man introduced Ringo to The Beatles, scared Stephen Stills at Woodstock, told KISS to use makeup and costumes, gave the Bee Gees the word "Saturday," and started psychedelia. The show opens with a testimonial from this guy: 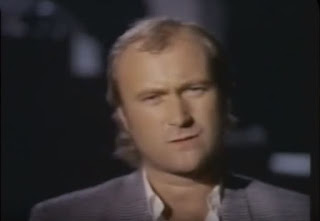 Other celebrities include Otis Williams of The Temptations, Bill Graham, Elton John, Clive Davis, Wolfman Jack, Graham Nash, Stephen Stills, Joan Baez, a surprisingly coherent Brian Wilson, Ringo, Don Cornelius, and Grace Slick. Very few say anything negative about Bruno (Baez gets in a couple jabs), yet the man remains a bit of a mystery to all, especially after he "disappears" in the early eighties.

Unlike The Rutles or Spinal Tap (or the more recent Walk Hard and Documentary Now), Bruno doesn't quite hit the mark. Director James Yukich gets the various looks down from the documentary style to an American Bandstand appearance, unused Woodstock footage, a psychedelic film, a local commercial, and more. However, the music (mostly from Willis' Return of Bruno album) never sounds anything but eighties. Keyboard and drum sounds especially jump out as anachronistic whether on Bandstand, at Woodstock, or with The Temptations in 1971. Also, they don't used parody songs (except in the psychedelic section and one mentioned below). Instead, they plug songs into a period, but Bruno appears to have never evolved beyond a cover act, and so we simply hear renditions of existing songs. 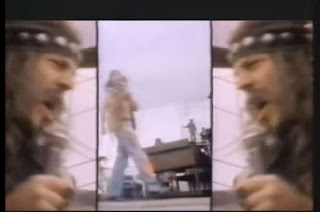 That said, Bruno has some laughs. Michael J. Fox plays himself as a Bruno obsessive and collector of "Brunobilia." 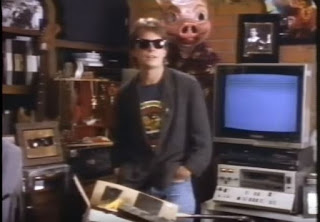 The psychedelic film looks authentically silly (the pig head with Fox comes from it). 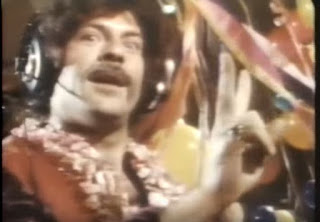 Bruno also has a late seventies new wave failure--Bruno's Basement, featuring Bruno on blues harp and "four women all playing bass" (and looking a lot like Robert Palmer's "Addicted to Love" "band.") They play a weird version of the Peter Gunn theme. 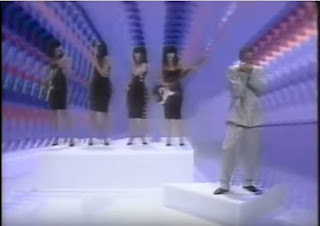 A little past halfway through, Fox pops in a dusty tape, and we get to see some live (legitimately) Bruno performances. Willis makes a passable R&B singer, plays a mean blues harp, and of course has charisma to spare as he struts and mugs his way through a number of songs, backed by a crackerjack if eighties-looking-and-sounding band. For some reason during "Down in Hollywood," he dons this spectacular outfit. 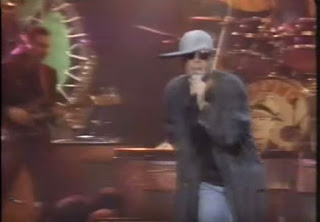 As someone who normally wants more music in his music documentaries, I didn't want more music in this one...or not all at once. Like I implied, the music doesn't stink, but it kills whatever slight momentum the "funny" part had and makes the show more obviously a commercial for the album. I was a little surprised that the show went back to Clark for a closing statement (hyping Bruno's return natch). The credits run over Willis as Bruno riffing about inventing Gumby.

The flaws in the show suggest its origins--an afterthought once Willis had recorded the album, slapped together from ideas Willis "improvised" with the writers, another idea these writers had that suited Willis' needs, a character Willis had rattling around in his head? Ridiculous as it sounds, I'd like to see documentary about this fake documentary or at least read an oral history. Where did this come from? Why did it ever happen?

Should you watch The Return of Bruno? I guess that depends on your Bruce Willis fandom. If you're a huge Willis fan, well, you've probably seen it or at least suffered through worse from him. If you want to mock him, well, you might find some things to mock but maybe not enough. Ask yourself this. Will you "respect yourself" in the morning? Me, I'm gonna find some more vanilla extract and try to forget the whole thing.