Here's a shot of the "special guest" who sat in on the recording of the podcast this time: 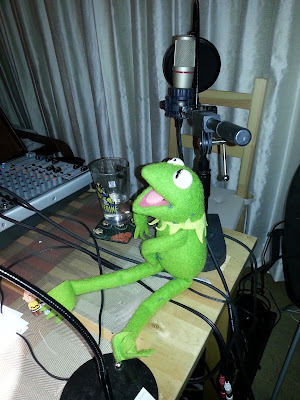 As usual, he was a consummate pro during the session.

*"Varsity Drag," revived by Statler and Waldorf in this episode, was written in 1927 for the stage musical Good News.

*The original Muppet Show ran for 120 episodes from 1976 to 1981. Unlike Saturday Night Live, on which Steve Martin is credited as hosting 15 times, The Muppet Show never had the same host twice.

*For more on Spike Milligan, Rip Taylor, and Avery Schreiber, plus clips from this very episode of The Muppet Show that Disney hasn't yet pulled, check out the YouTube playlist.

*Prairie Dawn is the blonde girl muppet on Sesame Street and still makes appearances despite being phased out in recent years. As with any change that I disagree with over the last 30 years, I blame Elmo.

*The Zucchini Brothers are perhaps inspired by a real act: The Zacchini Brothers! The first modern human cannonball to be shot out of an air cannon was High Zacchini. The act is much more dangerous than we let on in the podcast; an article on The Straight Dope says that more than 30 of 50 regular acts have died, usually from rough landings.

*Menudo was a Puerto Rican boy band that peaked in the 1980s and constantly reinvented itself as members quit, aged out, and/or were fired.

*According to Wikpedia, The Muppet Show has not been seen regularly on American TV since Odyssey shut down in 2001. Only the first 3 (of 5) seasons are available on DVD, and the show has not been licensed anywhere for streaming.

*The Center for Puppetry Arts is still around, still spotlighting the Muppets and Jim Henson's characters.
Posted by Rick Brooks at 6:00 AM