In Search Of...Something to Write

Earlier in the week, I found myself pondering innumerable questions. Would I have something to write to expand on this week's episode about In Search Of? After we recorded the episode, I had watched some more In Search Of on topics like Atlantis, the Bermuda Triangle, and--of course--Bigfoot. Would one of those offer more insight or jokes we hadn't yet covered? Could I possibly come up with an image-based piece like the one of the Bionic Mustache or a high concept one like Frank's Diary? What about Nimoy's mustache? Only time would tell if I had a tale to tell.

Idea one: watch an episode about a mystery now solved and compare the speculation to the truth. I immediately thought of the Titanic, once a hallmark of speculation. I went looking for the episode, knowing it must exist, yet as I scrolled through episode after episode, I didn't see it. Killer bees, UFOs, UFOs, UFOs, the Lindbergh baby kidnapping. No Titanic. Would I ever find it? How could a show as focused on the mysteries of the unknown as In Search Of possibly ignore the greatest shipping disaster of all time? Finally, I found it all the way in season 6. It originally aired on November 30, 1981, a mere four years before the discovery of the doomed ship on the ocean floor.

As I watched, I waited for inspiration, that one wacky person or theory to latch onto, but alas, none appeared. Yes, the discovery of the Titanic changed some of the general thought on the damage and the sinking. The iceberg buckled plates on the hull, causing small areas for water to enter rather than the long gash theorized in the show, but that theory didn't represent one of a crackpot. It represented the prevailing theory. Also, we now know that the engines and boilers didn't fall through the ship and that it cracked as it sank. Again, nothing spectacular there. In fact, I would still recommend watching the episode for an eyewitness account from a woman who survived the disaster as a child. Also, Nimoy utters these classic In Search Of lines:


The story of the Titanic is one that raises more questions than it answers. Where exactly was she lost? Will we ever find out? What was the mystery ship that sailed so close to her in the night? What about stories of a rules-flaunting romance between a boy from steerage and a wealthy young woman? 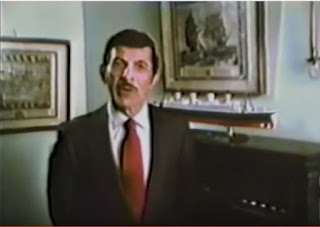 Of course, someone did find the Titanic, which has answered many questions. The episode does briefly feature one potentially interesting figure, Jack Grimm, a wealthy oilman who searched for (and claimed to have found) the Titanic, and this led me on my next quest.

While reading up on the Titanic's discovery, I saw reference to Grimm as a man who had also searched for Bigfoot, the Loch Ness Monster, a hole in the North Pole (connected to the Hollow World theory), and Noah's Ark. Boy, he sounded like the perfect subject, a man in search of, well, everything you would expect to see on In Search Of. Our friend Google would certainly turn up loads of information on this character and all his thrilling expeditions. He sounded straight out of a 1970s comic book or a 1930s serial: Jack Grimm and the Quest for Noah's Ark, Jack Grimm vs. Bigfoot, Jack Grimm Tames the Loch Ness Monster, Jack Grimm: Titanic!

Uh, no. I found some obituaries, a few small references on Bigfoot sites, but only his Noah's Ark and Titanic adventures gained more than a passing notice in his obituaries. For instance, he claimed to have found Noah's Ark, brought home a timber dug up from Mount Ararat, and carried a piece of it with him at all times. Also, of less interest, he rarely paid for these adventures himself, instead raising the money from others. I did find a 1976 documentary called In Search of Noah's Ark, but Grimm doesn't appear in it. I also found a 1990 documentary on the same subject (hosted by the grear Darren McGavin), but it didn't have credits for the talking heads, and I didn't have time to watch the whole thing.

So I find myself again asking what would I write about? Perhaps I'll never know...or perhaps it will come to as if in a dream (and what are dreams?). Will the audience find itself fed up to end this mystery with only more questions? Only time will tell...or will it?