As mentioned on our Buck Rogers episode Mike watched all of season one in preparation. Here now, we offer his "official" BOTNS ranking of the episodes from best to worst. For the purposes of this ranking, he considered all two-part episodes as one episode.

1. The Pilot movie, AKA "The Awakening," Parts 1 and 2: In this case, I'm recommending the theatrical movie version from the first season DVD set (the two-part TV version appears on the season two set). This offers some fun space opera antics, sexy Princess Ardala, a space cotillion, some space disco, and some of the weirder sci-fi elements that mostly vanished once the series started (including the Computer Council). Wilma seems a little off, and that opening credits sequence we talked about seems A LOT off, but otherwise a good time, plus Buck swears a little.


2. "The Plot to Kill a City," Parts 1 and 2: Frank Gorshin, Anthony James, and others play space assassins bent on destroying New Chicago because they killed one member of their gang. Buck infiltrates them, but things don't go entirely as planned. Markie Post also guest stars as one of the many wayward women Buck rescues in his adventures.

3. "Space Vampire": Listen to our episode.

4. "The Return of the Fighting 69th": Married weapons dealers who nearly died in an accident sort of caused by Wilma seek vengeance on her by destroying the Earth (or least New Chicago--seriously, space bad guys, dial back the anger a little). In order to navigate an asteroid field, Wilma has to recall the Fighting 69th, a group of pilots she put out to pasture. Good turn for Erin Gray as Wilma, Peter Graves shows up and flies a spaceship (and any fan of Airplane laughs a little in a good way), and one of the bad guys shoots fire from his hand!

5. "Flight of the War Witch," parts 1 and 2 (double-sized episode on DVD): In the season finale, Buck, Ardala, the entire Draconian fleet, and, well, just about everybody travels to a parallel universe to help a planet of light people (who conveniently can look like people people) stop the War Witch Zarina (Julie Newmar--really more just a mean lady). A good adventure with some interesting special effects, and Ardala gets to grow a little after Newmar's Zarina puts her in her place (also, she gets to wear this KISS-like action outfit). It almost seems like a season two setup in a lot of ways...but then they revamped the whole show. 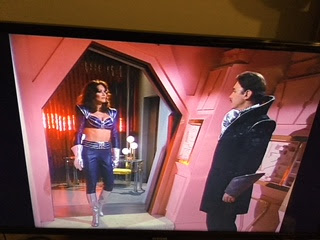 6. "A Dream of Jennifer": One of the better "serious Buck" outings. Some bad guys disguise a woman as Buck's long-lost-to-the-apocalypse girlfriend to lure him into doing some business for them. He also visits the City by the Sea, which apparently used to be New Orleans (perhaps answering the naming question when it comes to cities with a preexisting "New").

7. "Planet of the Slave Girls," Parts 1 and 2 (double-sized episode on DVD): Really, a planet of slaves in general, though Wilma briefly becomes a "slave girl" and almost sweats to death with another one. Features Jack Palance as a superpowered cult leader (he can shoot ray beams from his hands), Roddy McDowall as a clueless bureaucrat, David Groh as a pilot with a beef with Buck and his 20th century ways, plus a cameo by Buster Crabbe (Buck Rogers and Flash Gordon in the movie serials). Also, Buck baffles the 25th century folks with football lingo and busts out some kung fu.

8. "Unchained Woman": Buck goes undercover in a prison to bust out a prisoner/witness (Jamie Lee Curtis), which leads to some Western-style hijinks with a hint of The Fugitive (a relentless android chases them). Michael Delano (the villain in the Wonder Woman episode "Disco Devil" we discussed in season two) plays the heavy. Also features a "sand squid."

9. "Cosmic Whiz Kid": Gary Coleman guest stars as fellow 21st century refugee/genius Hieronymus Fox, who gets kidnapped by Ray Walston. Buck and Wilma have to rescue him, but, well, he kind of rescues himself. Prime Coleman era, and you can't go wrong with Walston, but Coleman and Gerard share very little screen time.

10. "Cruise Ship to the Stars": A woman suffers from a Jekyll and Hyde situation and is committing crimes on a cruise ship and trying to kill Miss Cosmos. Buck shows up to provide security, while Wilma goes undercover (in a terrible, terrible wig). Also features some more space disco and the only appearance of Twiki's "girlfriend" Tina. Also notable for an appearance by Dorothy Stratten as Miss Cosmos.

11. "Happy Birthday, Buck": Wilma and Dr. Huer send Buck on an escort mission to get him out the way while they put together a surprise birthday party for him. Good thing because he ends up thwarting an assassination plot against Huer by a vengeful mutant and a greedy psychiatrist! Morgan Brittany guest stars, and bronze age comics stalwart Martin Pasko writes. Also, we get to see New Detroit! Learn more about the show and "Happy Birthday, Buck" from Pasko himself on this great episode of John Siuntres' Word Balloon podcast, including a bonus Jack Klugman impression (Buck portion starts around the 25-minute mark).

12. "Ardala Returns": Second banana Kane's new hatchet fighter keeps blowing up, so Ardala decides to enlist Buck's help, whether he wants to or not. The Draconians use a cumbersome technique to make their own android Bucks (which will serve an added benefit to Ardala, if you catch my drift). Buck sabotages the clones with his brain waves or something, and Gerard gets to have some fun playing different aspects of his personality.

13. "Olympiad": Should have been called "Space Olympics" because it centers around, well, space Olympics. An athlete wants to defect, and the Directorate uses Buck's celebrity to send him as an emissary and help the athlete defect, which he eventually does with the help of the athlete's space-bobsledding girlfriend.

14. "Planet of the Amazon Women": Another misleading title. Buck gets kidnapped to a planet of mostly women (its men died in a war or ended up as slaves off-planet) and gets put up for auction by TV's Dr. Shrinker. The planet's princess buys him so he can help her start a revolution. Meanwhile, Wilma, Huer, and Theopolis work on a trade deal with the mean, pointy-eyebrowed computer head we mentioned on the podcast.


15. "Vegas in Space": Buck goes to a space casino planet to rescue a kidnapped woman. Along to help, Major Marla Landers (the Wilma replacement that didn't happen). Given the great title, a little disappointing, but notable for the first appearance of Buck's Han Solo cosplay. Also criminally underuses Cesar Romero.


16. "Twiki is Missing": In the B story, Wilma leads a mission to drag a giant hunk of frozen oxygen through a narrow hole in the Earth's atmosphere (or something), which could really help or catch fire and obliterate life on Earth. It ain't all space rainbows and space puppy dogs in the 25th century. Over in the A story, a guy running a mining colony uses three superpowered ladies to robotnap Twiki. If I remember correctly, Buck saves him, then ends up taking him back, and then they run through a bunch of hallways, get caught, escape, and run through them again maybe. Anyway, it all works out. Buck saves Twiki, uses the explosives they're mining to help out Wilma's mission, and frees one of the superpowered ladies from the bad guy's blackmail control...I think.

17. "Escape from Wedded Bliss": The first of the Ardala returns episodes (but last in quality). Ardala tries to force Buck to marry her by threatening to blow up the Earth. I'm no expert on romance, but seems like a bad strategy, princess. Anyhow, he pretends to be down with it so he can get on the mother ship and blow up the weapon. Fun fact. In Draconian culture, the more formal the occasion, the fewer the clothes.

18. "Buck's Duel to the Death": Probably better than "Escape from Wedded Bliss," but I almost forgot to include it, so maybe not. Buck goes to a planet to help it escape Trebor, an oppressive warlord (played by craggy character actor William Smith), but ends up having to fight him to fulfill some kind of prophecy or something. Trebor can shoot electricity, but Buck uses some 20th century know-how to stop him and put the locals on the long road to reestablishing democracy.

19. "Space Rockers": Oh, "Space Rockers," how I wanted to love you. I mean, you're called "Space Rockers," and you feature mind-control space rock music, musicians playing funky space instruments (including one that pretty much looks like a table), plus great guest stars like Jerry Orbach, Richard Moll, and Judy Landers. Yet, "Space Rockers," you didn't live up to your potential, even with the song "Odyssey," which also became some kind of disco hit. You could have been better, or you could have been better by being lamer. Instead, you stuck to the middle (and didn't utilize Erin Gray). I'm not sure what went wrong here really, but it went so wrong that I didn't even notice that Genius Award-winner Leonard Lightfoot plays one of the space rockers. If you're keeping score at home, that means both Genius Winners have played characters in sci-fi productions of questionable quality. Fun fact: Johnny Harris, who created "Odyssey" for this episode, also scored the third season Wonder Woman and worked as Lynda Carter's musical director.