In this week's podcast, Mike and I talk about the strange case of Jimmie Walker and how present he was or was not for the roast of Peter Marshall. It was difficult to find much online about this--searching for Walker now yields mostly speculation about dating or not dating Ann Coulter--but the comedian did mention his experiences on the series in his memoir. 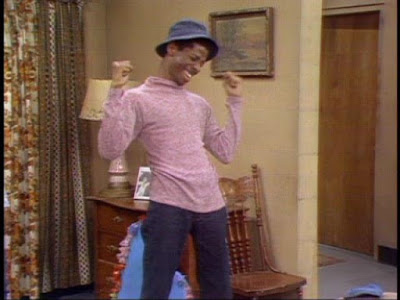 Walker first met Celebrity Roasts producer Greg Garrison when doing a shot on a Rowan and Martin variety special that aired on NBC after the duo's Laugh-In ended. He did a 4-minute standup segment, and was treated like an afterthought by Garrison, who told him, "OK, you got some laughs. So what?"

Later in the book Walker says he was sometimes the only black man on the dais for the roasts because they had to have one. Garrison, he writes, still didn't think he was funny.

"The only reason you're on the show," he said, 'is that the Network told me to put you on the show." Though the roasts were on NBC and Good Times was on CBS, my Q score (which measures public appeal and is important to advertisers) was so high that even a competing network wanted me to make an appearance.

But Garrison made sure I rarely told many jokes. Instead, to fulfill his orders I was mostly shown sitting on the dais during the tapings,. When viewers saw the show, there I'd be, howling with laughter at a terrible joke from Charo. In fact, Garrison taped my reaction shots before the roast. I had no idea what joke I'd be laughing at!'

The dictatorial Garrison also insisted that all of the men wear a tuxedo or suit and tie. But when we passed on the way to the set for the first show, I just had on my usual jacket.
"Where's your tie?" he asked.
"In my dressing room," I told him.
"Don't lie to your f****** idol!" he shouted.
He was right. I never did have a tie--and I never wore one on the show, either.
Posted by Rick Brooks at 6:00 AM