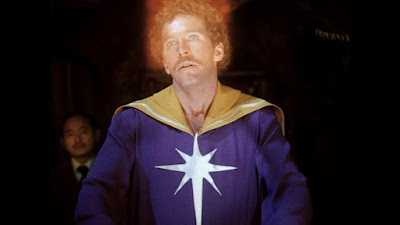 *As we mentioned on the show, Doctor Strange premiered on CBS  September 6, 1978, at 8:00 P.M. against the season premiere of Eight Is Enough and hour one of a rebroadcast of an episode of Roots on ABC plus Sharks: The Death Machines and Dick Clark and a Cast of Thousands on NBC,

*The character premiered in Marvel's Strange Tales #110 in 1963 (cover dated July but likely several months earlier on the newsstands) and was created by Stan Lee and Steve Ditko, though it appears Ditko did most of the character development and even plotting. This 1978 TV movie was the good doctor's first appearance on the big or small screen.

*Peter Hooten (born November 29, 1950) made his screen debut in an episode of Marcus Welby and appears in 2017's Souleater.

*The Zoo Gang is a 6-episode British TV series with John Mills, Brian Keith, Lili Palmer, and Barry Morse. if you don't see anything else in our YouTube playlist this week, please at least check out the great opening to the show!

*Morgan LeFey is an enchantress who figures prominently in Arthurian legend. She is thought to have first appeared in 1136 in Geoffrey of Monmouth's account of the life of Merlin.

*Among the events that happened in 1478, the year deemed not mystical/medieval enough by us:

*Click here for Aaron Couch's Hollywood Reporter piece we discuss on the podcast.