Yesterday we took a look at what was on the tube 40 years ago, to the very day, courtesy of the December 16-22, 1978 St. Louis edition of TV Guide. It's no longer to the day, but it's still 40 years later, and that's a neat round number, so let's examine the sports, late night shows, and other options on that day.

(By the way, if you're wondering, A Charlie Brown Christmas had aired on Monday that week.)

Elsewhere on the dial, Navy took on BYU in the 1978 Holiday Bowl. Remember that back in the pre-ESPN days, and even later, many bowl games were syndicated across the country. 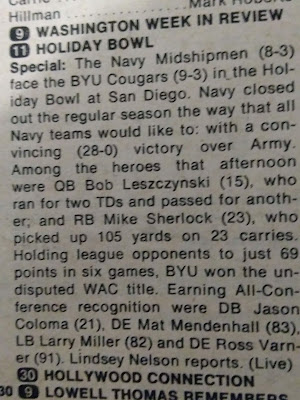 The Kansas City (!) Kings played the Phoenix Suns in NBA action on another independent station. 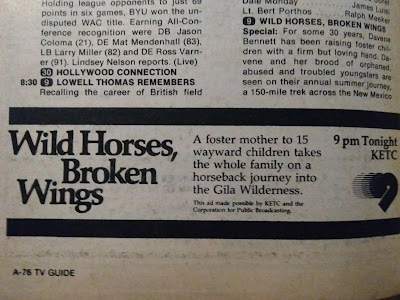 Preceding it at 11 (remember, this was when the show was 90 minutes) on The Tonight Show, Johnny's guests were Bert Convy and Marilyn Horne. ABC went with a Baretta rerun, while the CBS Late Movie was Quo Vadis.

It's also cool checking out some of the cartoons on during the morning: Popeye, Bugs Bunny,Heckle and Jeckle, The Flintstones, Tom and Jerry, Mighty Mouse...all the classics! Of course that's in addition to kiddie staples like Romper Room, Sesame Street, and Captain Kangaroo.

What do you think about TV in 1978? Better? Worse? Bert Convier? Well, clearly the last one is true.