Welcome once again to the thing we call the Ten: 10 people, places, shows, things, minerals, or vegetables from the BOTNS universe of shows of the 1970s and 1980s.

1) Abraham Lincoln: On this Presidents Day holiday, let's take some time to remember the ill-fated attempt to copy Welcome Back, Kotter: The late-seventies sitcom Mr. Lincoln, I've Been Thinking, with Honest Abe as a country lawyer who exits the rat race to settle down as a teacher in a one-room schoolhouse...or at least he THINKS he can settle down until he sees the motley assortment of misfits in his class.

2) Bob Newhart: His show is on Hulu, as we mentioned last week, and, hey, it's not TV, but he did play the prez in 1980's First Family. That movie was ON TV, so that should count for something. And the ADS were on TV:

3) Regina King: The former 227 star managed to not get massacred on this play:

4) Hal Williams and Marla Gibbs: Friend of the pod and member of our Facebook group (come on over and say hi and join in!) Jim posted this great pic of the 227 stars at a recent event:

6) The Greatest American Hero: Many of us believe the greatest American hero is Al Bundy, but here we refer to the 3 season light superhero fantasy show, which is now on Amazon Prime and which would make a great subject for the podcast. It's hard to believe the series ran only 45 episodes.

7) Wiseguy: The critically acclaimed but seldom watched series is now on Amazon Prime. I detect a theme here...  I think Prime may be helping us program an entire upcoming season.

8) The Brady Bunch house: The surviving cast appealed to the public to help it decorate the house with vintage items as part of its HGTV-supported project to renovate the joint. I'm glad that the show's representatives are showing the same devotion to verisimilitude that was such a hallmark of the series.

9) Love American Style: It was just Valentine's Day week, and what better way to learn about the human condition and the vagaries of romance than by watching this show? Too bad it's not streaming and is way underrepresented on DVD. 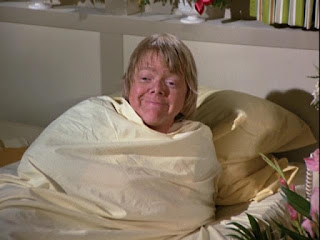