*Greatest Sports Legends aired in first-run syndication from 1972-, producing 207 episodes. In this week's podcast, we discuss the profiles of Terry Bradshaw (May 1987) and Bob Uecker (July 1985).

*The series featured multiple hosts over the years, including Jayne Kennedy (who hosts the Uecker episode) and George Plimpton, but also jocks (ex- and current) like Tom Seaver and Reggie Jackson.

*Despite what Rick says on the podcast, the New England Patriots have won 6 Super Bowls, with quarterback Tom Brady winning all of them.

*Here's a cool pic from Pinterest of the old Sears catalog NFL merch: 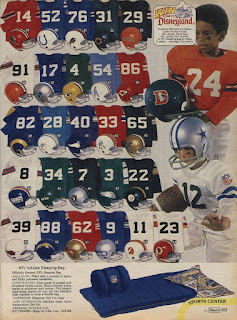 *Terry Bradshaw played QB for the Pittsburgh Steelers from 1970-1983, then entered the Pro Football Hall of Fame in his first year of eligibility in 1989. he started his broadcasting career in 1984 as a color commentator on CBS' NFL game coverage, then moved to FOX and became a studio analyst.

*Check out Franco Harris' Immaculate Reception in our YouTube playlist this week!

*Willie Stargell, the "guest host" for the Bradshaw episode, is himself a Hall of Famer, entering the Baseball Hall of Fame in 1988 after a 21-year career with the Pittsburgh Pirates in which he hit 475 home runs.

*There are no plans for a Belvedere revival...none that we know of, anyway.

*Ahmad Rashad is a former NFL Pro Bowl Wide Receiver and sportscaster who was NBC's main sideline reporter during the Michael Jordan years.
Posted by Rick Brooks at 6:00 AM