As promised on our Growing Pains episode, a review of Steve Dorff and Friends: Growing Pains, Theme from Growing Pains and Other Hit T.V. Themes. Even before I listened to the CD, I felt disappointed. The liner notes revealed that the album featured new recordings of the various theme songs by Dorff and others. I would have preferred the original versions, but this issue seems to plague TV soundtracks. Nevertheless, I dug into the 35 minutes of this album. Before I get into the individual songs, I should mention that most use a lot of generic eighties soft rock production that I don't care for--the electric piano sound that launched a thousand ballads, highly processed, harmonized guitar lines, drum machines, etc. That said, Dorff does have a knack for writing catchy melodies. 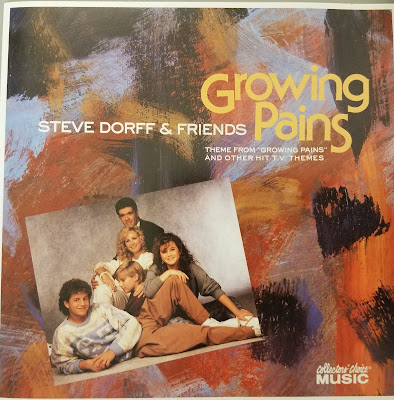 "Growing Pains Theme: As Long As We Got Each Other": This remake of the duet version features B.J. Thomas and Dusty Springfield. It clocks in at over 4 minutes, but it doesn't sound weird that way. With an added verse and many added choruses, it feels more like a duet that the truncated versions, and Dorff didn't add a bridge or any extra parts really. Instead, he leans on the best aspect of the song--the chorus. At the end, Thomas and Springfield vamp over background singers repeating "As long as." You know, this one works.

"Spenser: For Hire Theme": The highlight for me. I liked this theme back when, and I like it here. It combines some cooler eighties synth sounds (the kind that could almost fit with Miami Vice) with a melody and general arrangement that would have worked on a seventies detective show. Saxophone and admittedly cheesy guitar trade melody lines, and strings (or string-like sounds) add that seventies touch.

"My Sister Sam Theme: Room Enough for Two": Kind of weird. Kim Carnes couldn't make the recording session, so Jill Colucci (the writer of two songs I've never heard of) fills in. It opens with a one-minute instrumental intro, and then Colucci sings the very brief lyrics. I guess Dorff and lyricist John Bettis never wrote a full-song version of this one.

"Murphy Brown Suite: Like the Whole World's Watching": I don't get this. From what I can tell, Murphy Brown didn't have much of a theme song, so I don't know where this originally appeared. I'm also not sure what makes it a suite. Anyway, vocal group Take 6 gives a spirited performance, singing a capella for about half the song before some drums and other instruments join. They also sing Murphy Brown's name a bunch of times. Baffling.

"F.Y.I.": Another instrumental, and I dig this one. This must have served as the theme for Murphy's TV news magazine F.Y.I., and it fits. Energetic piano drives most of the song, although Dorff makes room for a wailing guitar solo, too. It sounds a little like early Bruce Hornsby and the Range. A lot more exciting than a ticking stopwatch. 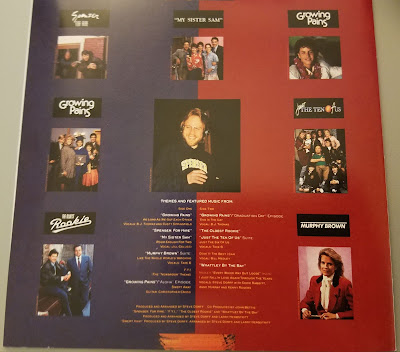 "Growing Pains/'Aloha' Episode: Swept Away": You know, I kind of like this one, too. The cheese factor goes up, and yet it feels more like a soft, spreadable cheese than a hard cheddar. Christopher Cross plays tasteful lead acoustic guitar, and various synths play various mellow sounds. You can really visualize the Hawaii montage that must have gone along with it. No doubt, Mike fell in love, Jason and Maggie had some alone time, Carol learned about Hawaiian culture (and maybe fell in love, too), and Ben did something goofy (hula dancing, surfing, finding a cursed idol?). Anyhow, a nice calm song.

"Growing Pains/'Graduation Day' Episode: This is the Day": B.J. Thomas returns for this catchy tune produced very much in the same style has the theme song. I'm pretty sure it might hold a record for the most key changes in one song. In fact, I'd swear it had key changes in the middle of lines. I can't figure out the point of view. Some parts sound like Jason and Maggie talking to Mike, but other parts sound like Mike talking to them: "I believed with every part of my heart/I would catch that one falling star for you/Oh, it might be a shade overdue/But this is the day."

"The Oldest Rookie Theme": This theme to the short-lived Paul Sorvino The Oldest Rookie, um, awesome. Electronic percussion and rhythmic synths churn under the sunny main melody (played on harmony guitars natch). Then blues harmonica adds a dash of incongruity before a heavier "riff" section (just imagine two or three or a dozen guitar players moving to the front of the stage, then riffing together). At the end of that section, electric piano and more blues harmonica trade back and forth (just imagine the keytar player and Bruce Willis moving to the front of the stage and facing off) before transitioning back to the main melody. If The Oldest Rookie had been a hit, everyone would know this song.

"Just the Ten of Us Suite: Just the Six of Us/Doin' It the Best I Can": I don't mean to pick on the talented guys in Take 6 (they sing lovely harmonies and seem full of joy), but again, weird. I guess it qualifies as a suite by actually having two parts, though. The first part, which takes up the bulk of the running time, features the guys from Take 6 (hence the title) doing an a capella variation on "Doin' It the Best I Can." That ends, and without transition, the actual original recording from the show kicks in. If you don't remember this Growing Pains spinoff or its theme, it features Bill Medley (fresh off his Dirty Dancing resurgence) giving it his considerable all in this spirited, positive-thinking theme. Like the show itself, it doesn't quite live up to Growing Pains.

"Whattley By the Bay Theme": Whattley By the Bay featured on CBS Summer Playhouse, a good reason for not having heard of it. Richard Gilliland (J.D. from Designing Women) played, to quote IMDB, "a big-city newspaper editor [who] decides return home to the town where he grew up." A pleasant instrumental in the same spirit as "Swept Away."

"Medley: Every Which Way But Loose Theme, I Just Fall in Love Again, Through the Years": The true disappointment of this album. I admit some of that disappointment comes from my own expectations, but it does seem like a missed opportunity. The liner notes explain that Dorff accompanies his own vocals on piano, which seems fair enough, and that the singers best known for the included songs join him: Eddie Rabbitt, Anne Murray, and Kenny Rogers. You can imagine it on a variety show or an awards show. Dorff sits alone at the piano in the spotlight and starts singing, then out of the shadows steps Eddie Rabbitt. The crowd goes nuts, Rabbitt takes over the vocals. The same happens for the other two songs, and then all three join Dorff for a final rousing chorus of "Through the Years" (or better yet the Growing Pains theme). Alas, this doesn't happen. Dorff does start alone, but then Rabbitt and Murray only join him with subtle background vocals. Rogers at least gets a chorus of "Through the Years." I didn't know the "Every Which Way But Loose Theme," but I recognized "I Just Fall in Love Again" from my mom's love of Anne Murray, and of course "Through the Years" was a big crossover hit.

Final thoughts: Going back through a second time to write this, I ended up a little more positive on the album overall than I thought. The instrumentals definitely stand out and seem more adventurous than some of the other pieces. Then again, the two Take 6 pieces show a willingness to experiment. I just didn't get the experiment. Music played a huge part of TV in the BOTNS era, and I wish there were more collections out there.

Posted by Michael Cowgill at 1:19 PM