I recently finished TV (The Book): Two Experts Pick the Greatest American Shows of All Time by Alan Sepinwall and Matt Zoller Seitz. I've read Sepinwall's recaps and interviews for years now and also enjoyed his book The Revolution Was Televised about the new golden age of television of the late nineties and 2000s and plan on reading more of Seitz's work. 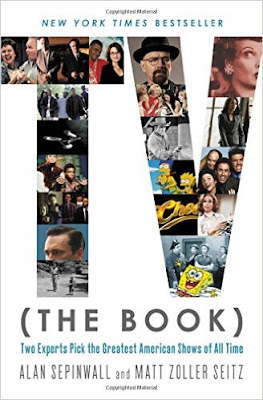 In TV (The Book), Sepinwall and Seitz used a fairly elegant scoring system to rank the top 100 (fictional) TV programs of all time. They also held themselves to certain rules, choosing not to rank series still on the air (with a few notable, long-lived exceptions) and limiting how many points one-season wonders could earn. They ranked each show in six categories (such as innovation and storytelling) and added up the numbers. In the case of the top five, they wound up with a tie and hashed it out in an Google chat reproduced in the book.

In the book, they present the top 100 as "The Pantheon" in a series of essays written by one or both of them. After that, they include sections called "Works in Progress"--ongoing series with potential (Game of Thrones, Better Call Saul, etc.), "A Certain Regard" (AKA honorable mention), "Miniseries," "TV-Movies," and "Live Plays for Television."

I enjoyed the book. Sepinwall and Seitz write thoughtful, insightful essays, highlighting the best elements of the shows, sometimes zeroing in on prime moments and sometimes expanding the generally accepted thoughts on those. For I Love Lucy, they spend a lot of time on the famous chocolate conveyor belt sequence but also highlight and praise the equally funny comedy of Ricky and Fred's failed attempt at doing the domestic chores in the same episode. They also don't forget to have fun, rattling off hilarious and weird moments in shows like The Simpsons (even combining serious and funny with an in-depth breakdown of Sideshow Bob stepping on rakes) and SpongeBob SquarePants and including sidebar lists ranking things like best mustache, best and worst boss, and best mom and dad.

As for the Battle of the Network Shows Era (1970-1989), well, it fares OK but not great compared to the nineties and aughts (but better than the fifties and sixties). The authors warn readers of this up front. No, they don't mention our podcast, but they explain why earlier decades don't get as much attention, and I accept their reasoning for the most part, especially given that they cut their critical teeth on those later period shows.

Without spoiling their list's details, I've decided to run some numbers for our audience. Just how many BOTNS-era shows made "The Pantheon"? What about miniseries? Well, here goes with some caveats. I chose to leave out Seinfeld, The Simpsons, and Roseanne, shows which began in the late eighties but hit their strides in the nineties (and of course The Simpsons has gone well beyond even that era). Likewise, I left out Gunsmoke, which ended in 1975 but began in 1955 and spanned the entirety of the sixties. For similar reasons, I included Cheers, which lasted into the nineties but stretched across most of the eighties, and I counted China Beach, The Wonder Years, and thirtysomething, shows which began in the late eighties but ended in the early nineties.

While a quarter of the list doesn't seem bad, keep in mind that only 12 from the fifties and sixties made the cut, leaving 62 shows from the nineties and 2000s*. From a critical point of view, this makes sense. TV has evolved, especially with the freedom afforded by cable and streaming services, but one could ask if enough time has passed to clearly judge shows that ended only a few years ago? Still, those early decades, though constrained and rough, laid the foundation.

*I say all this as a fan of many of the shows from that period.

A Certain Regard (50 shows presented in alphabetical order)
Not much to add, but notice the perfect ratio there 26:100 and 13:50. Coincidence I'm sure but a fun one.

Miniseries (ranked 1-20)
The low number here surprised me, especially since a 1970s miniseries ranked first and they introduce this segment with "TV's dominant format from the mid-'70s through the early '90s." HBO's slate of miniseries dominate this list (I love David Simon's work, but it surprised me to see all three of his miniseries, including one from 2015, on the list). Also, one 1980s miniseries makes it mostly for the historical value of its grandiosity and eighties excess.

Finally, we win a category! OK, the other four come from the nighties and 2000s, but a win is a win.

None of the shows we've discussed so far on Battle of the Network Shows made any of their big lists, although we'll probably be discussing at least one, maybe more, in season two. Many ended up in the shorter sidebar lists or got referenced in discussions of other shows. Sadly, they use CHiPs to help explain that while criticism has a lot of subjectivity certain elements can be fairly objective.

Still, I highly recommend TV (The Book). Personally, I'm not a huge fan of these kinds of lists, but Sepinwall and Seitz put a lot of the thought into it, and their love of the medium comes through on every page.