1) Casey Kasem: Yesterday we kicked off National DJ Month with a look at Wolfman Jack, but today let's salute the great Casey Kasem, known for his radio countdown, his cartoon voices, and his TV voice-overs. Don't forget his syndicated television countdown show, though:


2) Leon Redbone: R.I.P. to the performer of this classic theme song:


3) David Letterman: A new season of his Netflix talk show debuts this weekend, and the guest list looks staggeringly unappealing to me, but it's still Dave.

I still would rather see Larry "Bud" Melman, Chris Elliott, and Jeff Altman, though.

4) Dr. Ruth: A new documentary about her premieres on Hulu, but she got her start on the first incarnation of Lifetime. No, she wasn't being threatened in a deserted house by Perry King.


5) Julia: I happened to be able to catch a little of Aspire network the other morning and was glad to see this sitcom (barely in our time frame) is still on there. But what the (triple) deuce happened to Room 222?

6) Scooby-Doo Meets the Three Stooges: No reason other than I watched this last week. I have a soft spot for those celebrity team-up editions of Scooby. Oh, what I wouldn't give to have seen Shemp or Curly team up with the gang instead of Curly Joe, though.

7) The Brady Bunch home: HGTV still hasn't given a date for its TV show based on the renovation of the original Bunch domicile, but I love this pic. Don't play ball in the house! 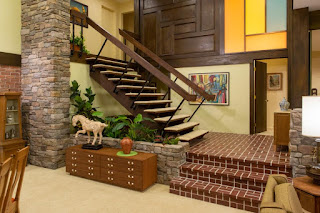 8) Later with Bob Costas: Nothing against Carson Daly, but the end of his run in the timeslot only reminds me of the great chat show Costas started in 1988.

Hmm, actually, I guess this is kind of a dig against Carson Daly, but he seems like a nice guy, so I don't want to be mean.

9) Norman Lear: Still basking in the glory of the success of the live specials on ABC last week, and who can blame him? But, Norm, ol' pal, how about using your renewed power to do something that will really change the world--like getting Hot L Baltimore on DVD?

10) Alex Trebek: We saluted him when he announced his pancreatic cancer diagnosis, and we are happy to salute him now that he has announced he is almost in remission!
Posted by Rick Brooks at 6:00 AM