Inside the Guide: A pair of Brady Bunch reruns

Today we go to the September 13, 1980 issue of TV Guide, which happens to be the Fall Preview issue but which contains some interesting items in the regular ol' listings.

Take this juxtaposition of two Brady Bunch reruns on different channels but at the same time: 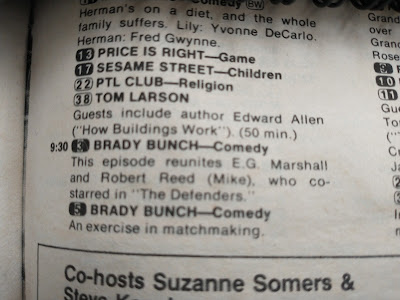 The second one is concise and to the point. The first amuses me.  This is 9:30 in the morning, and I can't help but wonder how many in the target audience would see this listing and say, "Ooh, E.G. Marshall!" or "Ooh, I loved The Defenders!"

E.G. Marshall! Yes, it's good to see him pop up in an episode, but that seems an odd choice to highlight given that the rest of the episode involves boys vs. girls, slumber party shenanigans, and the dilemma of Marcia claiming to be falsely accused.

I guess that's what made TV Guide the bible back in the day: its willingness to provide that kind of info.  You know what info is not in the Guide? Episode title, premiere date...or, in the case of the second episode here, much of anything.

In case you're curious, that E.G. Marshall episode is season 2's "The Slumber Caper," and the veteran actor is the principal who punishes Marcia for a mocking drawing of her teacher that was found in Marcia's desk. It premiered October 9, 1970.

As for that second one, that is a vague description, but maybe it refers to the season 4 "You're Never Too Old," in which the kids try to set up Carol's mother with Mike's father.

Email ThisBlogThis!Share to TwitterShare to FacebookShare to Pinterest
Labels: Brady Bunch, Inside the Guide