Because we've been focusing on the 1980 TV season this year, I want to step back and provide some more info on two CBS programs that debuted 40 years ago two days ago--Freebie and the Bean and Secrets of Midland Heights.

The new hourlong programs premiered December 6, 1980. Here is a promo from the following week's episodes. We posted this Sunday in the weekly Top Ten post:

But if you want more about these two series, where better to go than TV Guide? Here are the write-ups from the 1980 Fall Preview issue: 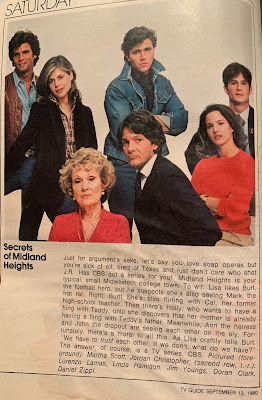 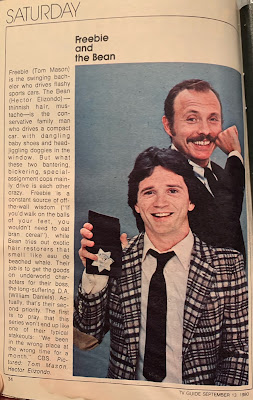 Secrets was essentially Lorimar's attempt to cash in on Dallas and get a younger audience, but it was gone after one season. King's Crossing, an ABC soap that premiered a couple years later, came from the ashes of this series but wasn't any more successful.

As for Freebie, it lasted a mere 9 episodes and was yanked before the end of January.

Email ThisBlogThis!Share to TwitterShare to FacebookShare to Pinterest
Labels: 1980 TV Season, Freebie and the Bean, Promo Theatre, Secrets of Midland Heights, This Day in TV History