*Thanks again to our Facebook group members for voting on our TV movie selection this season! It's easy to join and just hang out and talk TV with us. Just click here to get started.
*Below is our video list for this one, which includes the full movie itself, the pilot based on it, plus commercials, trailers, PSAs, and promos galore!
Remember you can always visit our official YouTube channel for past podcasts and episode-specific playlists for each one!
*Condolensces to the runners-up in the poll: Senior Trip (1981), Crash Course 91988), and Dance Til Dawn (1988)
*High School USA premiered Sunday, October 16, 1983 on NBC at 9:00 after First Camera and Knight Rider.  ABC went with Ripley's Believe It or Not, Hardcastle & McCormick, and 1981's Nighthawks. CBS countered with 60 Minutes, Alice, One Day at a Time, The Jeffersons,
*Here is the episode of You Must Remember This that Mike cites on the pod.
*Revenge of the Nerds premiered August 1984.
*This movie is Michael Zorek's first role, and he appeared in the film Private School that same year.
*Picture from TV Tropes: 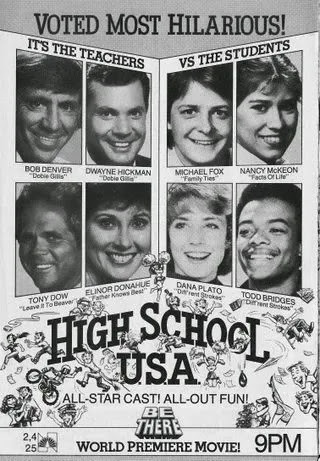 *The pilot based on this movie premiered May 26, 1984 with a different yet similar cast and is a must-see if you enjoyed the movie. We'll have more about it on Saturday.
*Jon Gries, AKA Dirty Curt, was 26 when the movie aired.
*Poison Ivy, an NBC TV movie with Michael J. Fox and Nancy McKeon, premiered February 10, 1985--just before Back to the Future!

*I'm sure Multicom Entertainment is a fine upstanding company...but I wonder why a big media company has a website that my browser says is not secure.
Posted by Rick Brooks at 6:01 AM