This week in June 1975 was full of repeats, but the networks sprinkled in some pilots, one-offs, and "serious programming."  This night 45 years ago is a good example.

June 27, 1975 saw movie night on CBS: Captain Nemo and the Underwater City and Shaft. Mind you, this is not one of the made-for-TV Shaft (JOHN Shaft!) movies, but it is the original, and can you imagine how much butchering occurred to get it into a 90-minute time slot? And forget about the violence and nudity!


NBC kicked off with a Sanford and Son repeat--one of the Grady episodes produced during one of Redd Foxx's contract disputes. Following Grady and Sanford's Son: reruns of Chico and the Man, Rockford Files, and Police Woman.

ABC led at 8:00 with an "encore presentation" of Kolchak and then the episode of the Odd Couple where Felix uses Oscar's pic for an ad campaign without his permission.  You know, I love The Odd Couple, but it's somehow easy for me to forget that the show was on as late as June 1975.  Its final season ended in March, and it was playing out the string in repeats here.  Also of note: This episode was written by David Duclon, who later helped give us BOTNS hits like Punky Brewster and Silver Spoons. Guest John Byner appears in the clip below.


ABC's Friday night lineup was unstable all season, and on this night it was Failed Pilot Theatre: 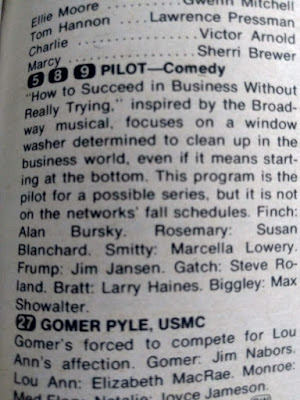 Abe Burrows, who wrote the book for the classic Broadway musical, spearheaded this adaptation.  Wikipedia lists it as a "comedy special," but as you see in this vintage listing, it was considered a possible start to a new series.  That seems a lot more likely than the creator of the play turning his baby into a 30-minute package for TV!

Incidentally, I love the language TV Guide used back in the day: "This program is the pilot for a possible series, but it is not on the networks' fall schedules."  In other words, don't get attached to it, readers!

No, I am sorry for making light of a program that explored a serious subject.  ABC didn't have much else going on Friday at 10:00, so it decided to air an educational/informative show for the public good.  These kinds of serious, well-intentioned news shows just don't turn up on the networks anymore. 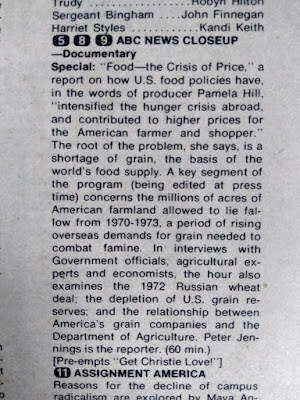 Note a young Peter Jennings is the correspondent here.  Jennings was then anchoring ABC's pre-Good Morning America effort and would become the chief foreign correspondent for ABC News months later. He wouldn't become anchor of World News Tonight for another three years, when ABC tried a multi-anchor format with Jennings, Frank Reynolds, and Max Robinson from different locations.

I like the bit at the end about pre-empting Get Christie Love.  Talk about an abrupt change! Imagine tuning in for that series and getting a sobering look at food shortages, global hunger, and agro-economic policy.


It's so much fun to take a deep dive into this one night of TV that we'll present another look next week, but we will go into late night in 1975!

Email ThisBlogThis!Share to TwitterShare to FacebookShare to Pinterest
Labels: Get Christie Love, Inside the Guide, Odd Couple, Peter Jennings, Pilots, This Day in TV History