This Day in TV History: A mini-mystery proves the fallibility of online TV listings?

Don'cha hate it when archival online TV listings are inaccurate or unclear?

Until the day when there is a single reliable day-by-day TV listings database, we have to cobble together airdates and what-aired-this-days through a variety of sources. One recent find was bothering me:  An Andy Rooney original special appearing in the listings in an original TV Guide for June 24, 1975. 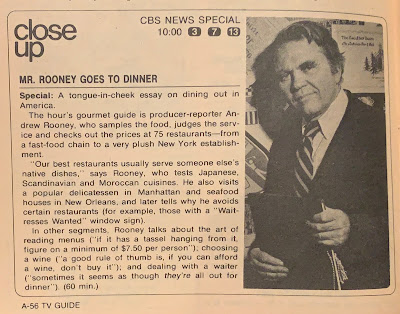 According to the Guide, 45 years ago today, on a night dominated by reruns, CBS premiered Mr. Rooney Goes to Dinner, a humorous look at the pastime of dining out from "Andrew Rooney. " Note that this "close up" does not mention 60 Minutes.  Well, that's because he didn't join that show until 1978. He had been producing TV specials for CBS for several years at this point.

However, researching the special yielded conflicting info.  The IMDB page says the show premiered April 20, 1976.  The 6/25/74 grid at Ultimate 70s does list the special, but it says it's a repeat. TV Tango is blank for prime time on that night! Wikipedia dates the special as 1978, though from context it appears to be a typo for 1976.

So I wondered, when did this air? Could THE GUIDE be wrong?  Well, my guess is that the Guide showed us what was scheduled that night, but not necessarily what aired, which points out an issue with old magazines as sources.  As for online sources, I think they are drawing from contemporary listings sources like TV Guide and may be subject to the same potential limitations. The spotlight from the time, though, does not have that standard "(Repeat)" designation.

Maybe the show was pre-empted and didn't air until April 1976?  Ah, I looked up what else happened on the date, and here the story takes a sad turn.  On June 24, 1975, the nation witnessed the largest number of casualties in a passenger aircraft disaster to that point when 113 died after Eastern Airlines Flight 66 crashed just before hitting the runway.  I don't know if coverage pre-empted the Rooney show on CBS, but on a summer night, it doesn't seem outlandish to think they might have gone with breaking news instead of the regular non-essential programming.

Below is some coverage from the local NBC station featuring Tom Snyder:


I still don't know the whole story behind Mr. Rooney Goes to Dinner, but my theory is that the special got bumped due to coverage of the horrible tragedy but then aired the next year.  Perhaps it's considered a repeat on Ultimate 70s due to the confusion over the original airdate, or maybe it did actually run in some markets.
Posted by Rick Brooks at 10:00 AM

Email ThisBlogThis!Share to TwitterShare to FacebookShare to Pinterest
Labels: Inside the Guide, Specials, This Day in TV History, TV Guide