1) Search: This week's Warner Archive podcast celebrates the 10th anniversary of the WA label and highlights one of its proudest achievements: Getting this cult series out on DVD! Check out our discussion of the show from our season 2 right here. 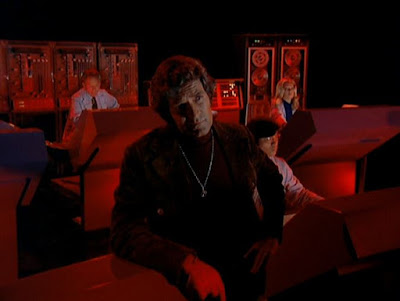 2) The Brady Bunch Hour: TV Shows on DVD reports a giant box set commemorating the Bunch's 50th anniversary--a collection including all the movies, spinoffs, and the original series. BUT WHAT ABOUT THE BRADY BUNCH HOUR? No Rip Taylor duets with Ann B. Davis, no sale.

3) Here's Boomer: TV Shows on DVD also announced the ill-fated attempt to make a series star of the lovable pooch is coming to DVD. The bad news is it's MOD, which stands for "Manufactured on Demand" and "expensive"--as in MSRP of $50 for 22 half-hour episodes ($25 per season).

Early 1980s NBC! Can we possibly resist doing a podcast episode about this show? Well, at that price, maybe we can.

4) Sidney Freeman: I'm not so sure I believe this story, but Alan Alda says Allan Arbus was so convincing as the resident therapist on MASH that he approached him for advice off camera.

5) Diahann Carroll: Back in the news as her character from the original Dynasty is going to be played by Michael Michele in the ongoing revival. I was tempted to not rank her just so I wouldn't have to look up how to spell Diahann. Classy actress, sketchy name.

6) Sesame Street: A Twitter question asked which of 4 characters you'd want to be stranded with on a desert island, and even if for only 8 hours or so, the response proved the show still has a hold on us. For the record, Oscar.

7) Thomas Magnum: The arrival of the original Magnum P.I. on Tubi TV this week is a welcome reminder that this is the one true Magnum (with the possible exception of former U.S. champion Magnum T.A.).

9) Hal Blaine: The late Wrecking Crew drummer played on iconic BOTNS-era TV staples like I Think I Love You, Love Will Keep Us Together, and In the Air Tonight. OK, just seeing if you were paying attention on that last one, but he did drum on the other two and countless other huge recordings.

10) Hunter: Hey, Decades is showing a Hunter marathon this weekend! Bring your...bring your...wht do Hunter fanatics consume when they get together? I'm thinking Coors and nachos.