Show Notes: Episode 7-7: Doctor Who "Genesis of the Daleks"

*Thanks again to listener Thomas M. for suggesting this episode!

*Doctor Who premiered on the BBC Saturday November 23, 1963.  The arc we talk about, Genesis of the Daleks, is from the series 12th season (first with Tom Baker), and it aired March 8 through April 12, 1975 on 6 consecutive Saturdays.

*Tom Baker is the Fourth Doctor, following (in reverse order) Jon Pertwee, Patrick Troughton, and William Hartnell. Baker played the role for 172 episodes from 1974 to 1981, when he was replaced by Peter Davison.

*The failed Fox revival starred Paul McGann in a TV movie/backdoor pilot in 1996. The movie did well in the UK but flopped in the USA, though the Eighth Doctor remains in continuity and is a presence in other media.

*Many of the early years of the series are lost, though the BBC is restoring episodes, often using animation, with help of audio and video footage from around the world. Most of the missing (or destroyed or deteriorated) episodes are from seasons 3 through 5. A new restoration just got a release date this month.

*Companions in Genesis are Sarah Jane Smith and Harry Sullivan. Smith is one of the more iconic "companions," and Sullivan only appeared in this 12th season. Actor Ian Marter later wrote Doctor Who novels.

*The highest-rated arc in the UK for Doctor Who, including the modern era, is the City of Death storyline starring Baker and premiering in Season 17 (1979). There is a catch, though--a strike sidelined ITV, leaving BBC without its biggest competition.

*Marvel Comics featured the Doctor for the first time stateside in Marvel Premiere #57, which began a 4-part saga. The company launched an ongoing title in 1984 reprinting material originally printed in Britain. 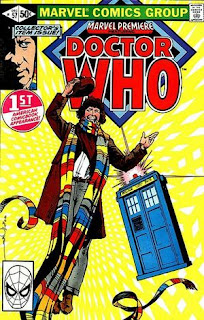 *Davros is played by Michael Wisher in this serial but also by multiple other performers over the course of the series. According to Wikipedia, Wisher based his portrayal on Bertrand Russell!

*The head of BBC One during this time period was...Bryan Cowgill! No relation to either one of us...we think.

Email ThisBlogThis!Share to TwitterShare to FacebookShare to Pinterest
Labels: Doctor Who, Show Notes