1) Buck Rogers, "Space Vampire": It's not a "neat" round number of a milestone, but we can't let the 21st anniversary of the premiere of this episode of Buck Rogers go without mention. Click here for our episode talking Buck and this memorable installment.

3) Benson, "Last Man on Earth": This episode premiered 25 years ago tonight. According to the description on the Paley Center's website (yes, the Paley Center!) this is a totally wild one. Forgive me for including the whole thing, but after you read it, I think you will appreciate my decision:

In this episode, everyone – apart from Benson – is excited about the approach of Halley's Comet, wondering if it could possibly have a catastrophic effect on the planet. Clayton dismisses their "sophomoric Hollywood theatrics," and Kraus soon ventures into the basement in search of a telescope for Katie's use at school. She soon falls asleep and enters a dream in which she is joined by Benson right before the comet arrives, and when they return upstairs, they find that everyone in the house – and in fact everyone else in the world – has been vaporized, leaving them "marooned" on Earth together. Seven long years pass and Benson, voted in as governor by "the people," grows ever more annoyed with his "wife," though Kraus is delighted with their extravagant lives as rulers of the planet with their two daughters, Beth and Mary.Thirteen more years pass and Benson is now the "emperor," though Kraus suddenly takes ill. They receive word from their adult daughters, who are exploring the globe, that they have finally found other living human beings, but Kraus takes a turn for the worse and Benson finally admits his passionate love for her before she dies.

4) Rudolph's Shiny New Year: There should be more New Year's specials! Any excuse for a seasonal animated tradition is OK with me.

UPDATE: It IS on Apple! Nice job, folks!

6) The A-Team: The first 4 seasons are available on The Roku Channel, free with ads.

7) Star Wars glasses from Burger King: Pretty sure my family had these back in the day:

8) National Drinking Straw Day: I didn't know it existed, either, but how about we celebrate by asking Marsha to bring us a couple of big milkshakes? 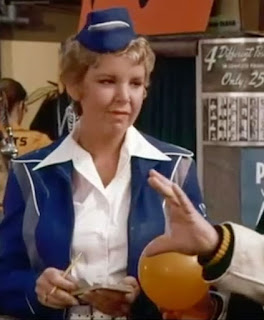 9) Glen Larson: The late prolific producer was born on this day in 1937. There's no truth to the rumor that he thought the date sounded cool and "borrowed" it from someone else.