(Note: This post was supposed to run Sunday, February 21, but did not because of my error, though I am blaming it on Steve Urkel, who is technically in the BOTNS era because his show began in 1989. Anniversaries, birthdays, milestones refer to 2/21, not 2/22.  Urkel apologizes for the error, even though he didn't "do that.")

1) The Muppet Show: After months of complaining about this not being on Disney Plus, you better believe I am happy about it finally being there.

2) Bert D'Angelo Superstar: Today is the 45th anniversary of one of the lesser-known Quinn Martin shows.  Paul Sorvino is the titular police detective, a NY transplant who shakes things up when he joins the force in San Francisco.  The Streets of San Francisco spawned this short-lived program, which didn't make it despite featuring the GENIUS Robert Pine in the cast!

3) Tyne Daly: Happy birthday to the 6-time Emmy winner, whose Cagney and Lacey gets a marathon on Decades this weekend.

4) Animalympics: I don't want to give away the mystery subject of our Fame Game episode this week, but this 1980 NBC special featured a lot of notable individuals.

5) The f-word: 40 years ago tonight, the late Charles Rocket let an f-bomb slip in an SNL sketch spoofing Dallas.

6) Guy Smiley: Because I just acquired this guy, who isn't all that smiley for some reason: 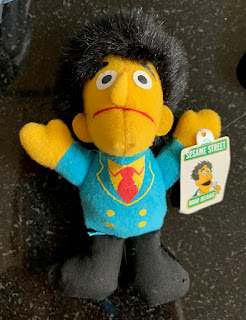 7) Christine Ebersole: Not only is it her birthday, but Ebersole's current program Bob Hearts Abishola was just renewed by CBS.

8) Kelsey Grammer: Happy birthday to one of our favorite supporting characters of the 1980s. Er, that is, the guy who played him.

9) Dynomutt: The robotic pooch made the cover of the new RetroFan magazine.

10) Jason Bateman: The official Carson channel just posted this clip of Bateman's first appearance on The Tonight Show, promoting the great It's Your Move in 1984: