Have you ever wondered what happens at a BATTY Awards After Party? Wonder no more. Here, we present the evidence as illustrated by Art Hondros. 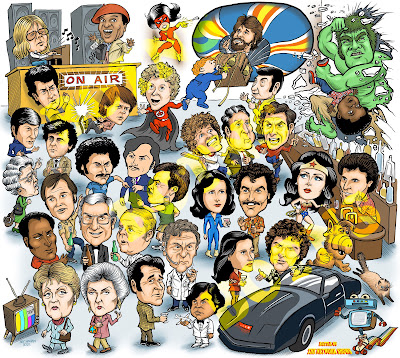 I've had an idea like this in mind probably since we started the podcast, thinking of those great Jack Davis TV Guide covers, MAD magazine, movie posters, and album covers. Nine seasons in, we've gathered quite a cast of characters to fill it, and if you're a regular listener, you know this event only scratches the surface.

I've known Art Hondros for years now through the local comics scene, and we collaborated on a comic in the past. He brought everything I expected of course: talent, attention to detail, enthusiasm, cooperation, humor, and--this might sound funny as an expectation--exceeding expectations. He also brought a few of his own ideas. In fact, he finished this in March, but we held it back because he had suggested adding Rockford and Tattoo, and we didn't want to spoil their then upcoming appearances.

As far as process goes, I gave wrote a script of sorts, breaking down the scene into different groupings. Rick added a few suggestions, and I sent that to Art along with reference images. He sent me some preliminary work, we offered a few tweaks, and the back and forth a continued a couple more times. One gag didn't come to me until I saw the near-final version, and Art added that (a small but significant item).

"Pro tip" from me: you can't beat accidentally choosing the right person for the job, too. Art said this in one of our early e-mail exchanges about the project: "For someone who strives for the standard of MAD Magazine artists’ panoramas, it’s a dream come true."

Now have you ever wondered where you can get your hands on this stunning piece? Well, wonder no more! You can find it on everything from shirts to pillows to wall art right here at our TeePublic store. I plan to go for the wall art myself. 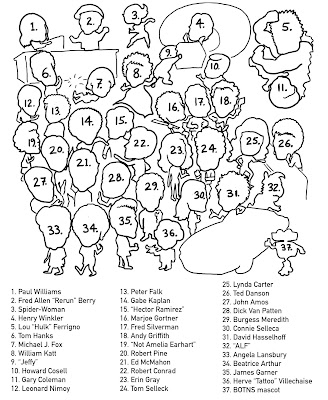