*We hope you enjoy our first foray into TV movies this episode! Let us know if you'd like to hear us do more in the future!

*The ABC Movie of the Week was a staple of the primetime lineup from 1969 to 1975. This Mental Floss article lists some other notable examples if you want to check out more of the telefilms.

*Pray for the Wildcats premiered January 23, 1974 on ABC, followed by Doc Elliott (a short-lived medical drama with James Franciscus). CBS offered The Sonny and Cher Comedy Hour, Cannon, and Kojak. 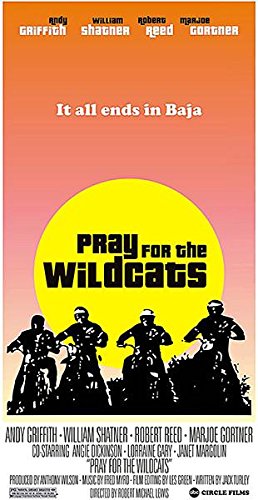 *According to Wikpedia, the movie was shot in Baja California, with a studio outside Tucscon standing in for the Mexico portions.

*It's commonly thought humans can survive several weeks in the desert without food but only several days without food.

*Click here for the Film Threat piece we mention on the podcast, complete with the reference to Andy Griffith's horrible dream!

*Wildcats received several legitimate home video releases, but a new Blu-Ray edition of the movie, complete with a new audio commentary, is on the way from Kino-Lorber, scheduled for release March 3.  So the movie is on YouTube now, but it may not be for long! Email ThisBlogThis!Share to TwitterShare to FacebookShare to Pinterest
Labels: Pray for the Wildcats, Show Notes