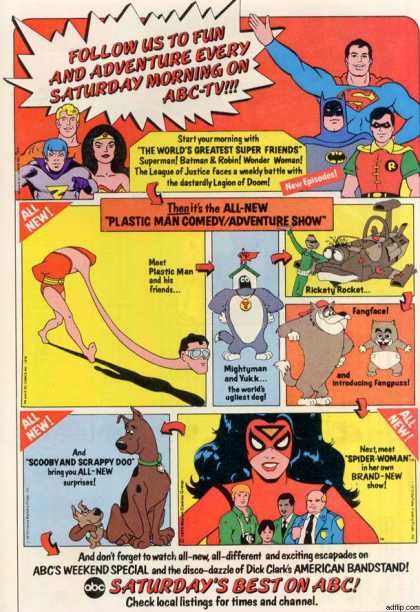 *The debut episode, Pyramids of Terror, aired September 22 at 11:00 A.M. against The All-New Popeye Hour on CBS and The New Adventures of Flash Gordon on NBC. 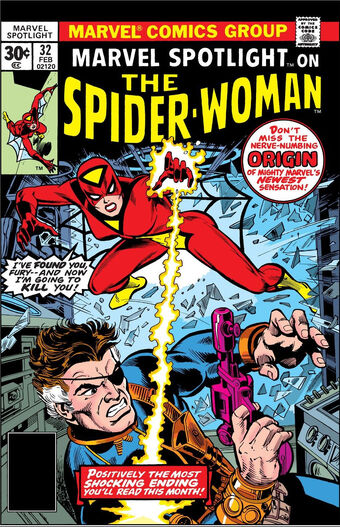 *Tarzan and the Super 7, a Filmation animated series, aired on CBS 1978-1980. It was an action-oriented show with one live-action segment, Jason of Star Command.  Jason later "graduated" to his own half-hour Saturday morning series, and much of the rest of the show morphed into a rerun show called Batman and the Super 7 on NBC.

You see, Tarzan and the Super 7 followed The Batman/Tarzan Adventure Hour, also produced by Filmation, which offered reruns of The New Adventures of Batman. So when the whole thing moved to NBC, Batman came back, and--you know, I don't remember Saturday morning cartoons being this complicated.

*Web Woman (Linda Gary) was one of the "Super 7" segments. Legend has it (isn't that much better than an actual source?) that news of this character directly inspired Marvel to come up with a "Spider-Woman."

*The Julia Carpenter version of Spider-Woman was a regular in the 1994 Iron man cartoon.

*Series scribe Jeffrey Scott is indeed the prolific writer of numerous Super Friends and hundreds of other era cartoon episodes.

*Justice magazine remains a mystery to us and our crack research team.

*Dullard co-reporter (?) and pilot Jeff is the voice of Bruce Miller, who has only two other screen credits! Here is his IMDB bio, as written by...himself!

Born Bulawayo, Zimbabwe. Studied at Bristol University, then trained at Bristol Old Vic Theatre School, England. 1970 moved to South Africa. Played Jesus in Godspell and Joseph in Joseph and the Amazing Technicolor Dreamcoat. He also had a very successful career as a pop singer. His international movies include Safari 3000 (with Stockard Channing & David Carradine), Oh Brother! and Rogue Lion. These days he is a radio broadcaster and producer of Radio Drama for SAfm Radio in Johannesburg, South Africa.