This Day in TV History: 40 years ago, a spectacular night on ABC 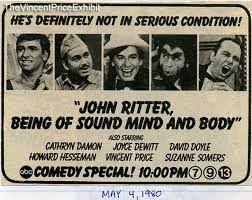 The Ritter special is a showcase for the star at the height of Three's Company fame. Directed by longtime Company helmsman Dave Powers, co-starring Joyce DeWitt and Suzanne Somers, and coming from Ritter's own production company, the hourlong broadcast features several sketches with costars like Vincent Price and Howard Hesseman.

The special got a seemingly random DVD release in 2004--or was it random? Well, Whitney Pastorek doesn't seem to think so in this blistering review from Entertainment Weekly. Reaction today to the special is indeed mixed at best.

People didn't care for it in 1980, as you can tell by this brief Picks and Pans review:

The concept—a spoof of America’s neurotic hang-ups—and the cast are too good for the material. Vincent Price is smooth as a behavioral psychologist, and Howard Hesseman is zonked out as a rock star’s shrink. The ubiquitous Ritter is, as ever, likable. But the skits drone on, as if this were a run-through, not an edited show.

(Vintage ad from http://vincentpriceexhibit.blogspot.com/ via rewatchclassictv.com)
Posted by Rick Brooks at 6:00 AM