1) MAMA:
Expectations for Mother: 95% of all TV moms
Reality for Mother: 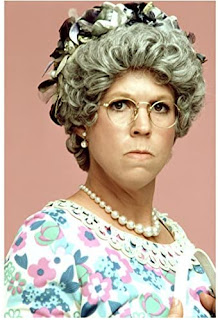 Just kidding! Happy Mother's Day to my wonderful mom and all the other muthas out there.

2) Reb Brown: The one true Captain America (arguably) is the cover subject of the newest edition of the delightful Retro Fan magazine.  We'll write more about it later, but we highly recommend the piece and the mag in general.

3) Mayberry R.F.D./Matlock: Both series are getting plenty of play on Me-TV as part of its Mayberry month promotion. Why don't we celebrate with a classic moment from former Royals slugger JOHN Mayberry:


4) Ken Berry: Speaking of Mayberry and Mama's Family, Me-TV published a list of things you never knew about Ken Berry. Hmm. yes, I suppose there are some people who haven't devoted their lives to exhaustive Ken Burry study, so we do have a duty to educate them.

5) Family Ties/Facts of Life: Antenna TV's marathons this weekend celebrate Mother's Day with Elyse Keaton and Edna Garrett (she did have a son, but he was a bit of a tosser).

6) Nurse: The 1981 show is forgotten now, but it is Nurses Week, and Michael Learned did win an Emmy for the series:


7) Mrs. C: As ABC prepares to celebrate Garry Marshall with a two-hour primetime special on Tuesday, we offer a salute to one of the friskiest TV moms out there, Marion Cunningham.

8) Teri Copley: Happy birthday to Ms. Copley, who won a nationwide rocket science competition to win the role of Mickey on We Got It Made.


9) Laverne and Shirley: The final episode of the long-running hit sitcom aired on this date in 1983, but its final moments featured neither Laverne nor Shirley!


10) Alex Karras: The NFL released its 2020 schedule this week, which I really see as an excuse to post another Alex Karras commercial (also starring Alice's Celia Weston):