CBN: The original Must-See TV (Inside the Guide)

The original "Must-See TV" in my household in the 1980s was the late-night classic lineup on CBN--yes, that CBN, the Christian Broadcasting Network.  The draw wasn't the endless showings of The 700 Club, the flagship program, but the 1950s television it ran. Look at this 1984 TV Guide page and check out the CBN listings: 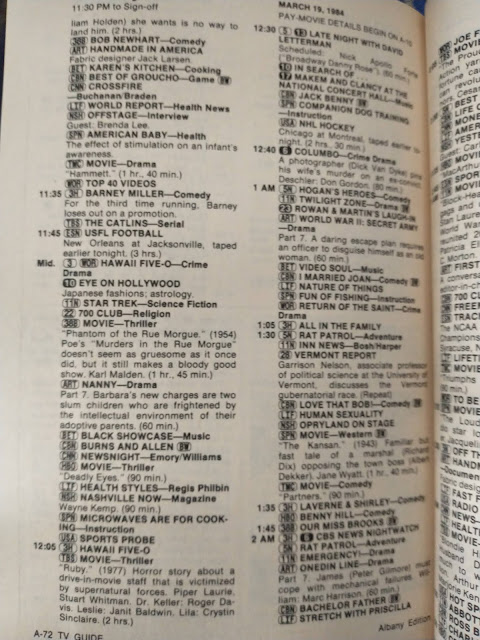 That's You Bet Your Life at 11L30, followed by Burns and Allen, Jack Benny, I Married Joan, Love that Bob!, Bachelor Father, and on the next page Life of Riley closes out the awesomeness before we get "back to normal" with another showing of--you guessed it--The 700 Club.

I don't want to offend anyone, but while I wasn't into Pat Robertson's showcase, I would have "tolerated" all kinds of religious programming if it paid the bills for stuff like those programs listed above. CBN gave me most exposure to most of those shows, and my dad and I enjoyed staying up late sometimes and checking out some old-school comedy.

I just picked up a 1988 issue from the same market (not that it matters since CBN was a national cable channel), and some of these shows were still around, albeit with some changes.  Remington Steele was on at 11.  Medical Center  and Quest aired later in the night.  And CBN showed other Westerns on the weekends--not just Gunsmoke and Bonanza, but lesser-seen ones like Broken Arrow and The Monroes.

So I tip my hat--and make it an Old Groucho beret--to that 1980s CBN and its commitment to classic TV at a time when you had lots of it in broadcast syndication, but no digital subchannels, no streaming, and little TV on home video.