1) Emilio Delgado: We dedicate this week's Top Ten to the late Delgado, best known as Luis on Sesame Street but an accomplished actor outside of that series who had a recurring role as Ruben Castillo on Lou Grant. When we talked about that show on our podcast, Delgado liked an Instagram post of ours and added a nice comment. In our book, that made him a Friend of the Show even if he didn't know it!

We wrote a post about that here. For two guys who grew up in the era we did, getting a nod from Delgado was a real thrill, and we hope it was a bit of a kick for him to have someone acknowledge his work on Lou Grant. R.I.P.!

2) Three's Company: Antenna TV celebrates the shows's 45th anniversary with a marathon on Tuesday--that is, unless some crazy misunderstanding leads to them running a bunch of Eight Is Enough episodes.

3) The Tournament: ESPN's recent docuseries on the history of Atlantic Coast Conference basketball as told through its postseason tournament is excellent...even the parts that don't talk about UNC!

4) Mary Jo Catlett: Me-TV has a story on "the cherished character actress" because...Well, I am thrilled to see a story on her, but it does feel like they will do anything to get a MASH connection on that website.

5) Major League Baseball lockout ends: OK, I can get excited about baseball again, and I know it's a different time, but I still miss the days when all owners and baseball players were fine upstanding citizens without any skeletons in their closet--you know, people like George Steinbrenner, Pete Rose, Steve Garvey...

6) The White Shadow: Hey, speaking of basketball--well, we were a couple of items ago--Decades has a Shadow binge this weekend, and the episode we talked about on the podcast (our second episode!) is on at 4:00 PM EST today!

7) Daylight Savings Time ENDS: This is the one we all dread, the one where we lose an hour, but, please, folks, as grumpy as you may be today, don't take it out on this guy: 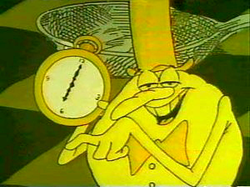 8) Johnny Carson Presents Sun City Scandals '72: NBC aired this special 50 years ago tonight. A follow-up to a similar program from 1970, it is a showcase for showbiz vets like Harry Ruby, Ethel Waters, and Eddie Foy Jr.

9) Tour of Duty: Season 2 is now on Crackle, and we mention this as a reminder that things tend to trickle in on that service as opposed to being added all at once. If you have a favorite show on there that has missing episodes or even seasons, check it every now and then!

10) Conrad Janis: R.I.P. as well to one of our favorite elements on Mork and Mindy and also, as we wrote recently, a talented jazz musician among other talents.