1) The Rockford Files: Well, ONE of us sure loves the show months after talking about it on the podcast, doesn't he?
OK, actually, we both do, but one of us has really been watching it. Find out more of what we've been watching on the new bonus episode we premiered Thursday!
2) Night Court: Or you could stay right here and find out that we've been watching some Night Court, too. But lest you think it'll show up in Season 10, let me put here what I threw up in our Facebook group: 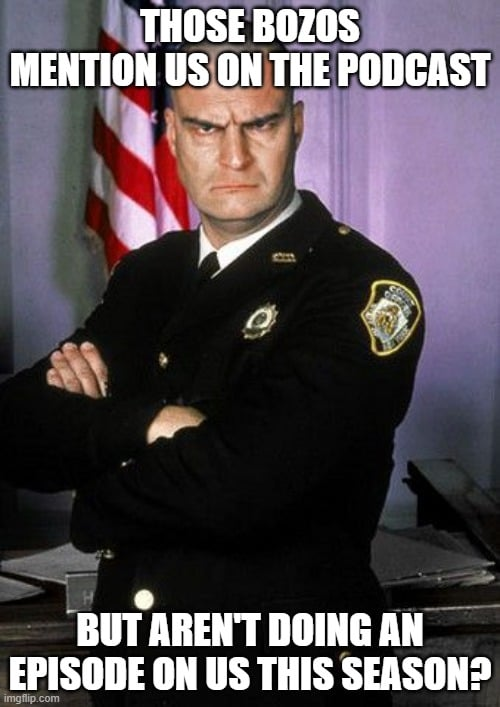 3) ?????: Congratulations again to Mike for acing this week's Fame Game on our bonus episode!
4) Solid Gold: OK, we'll name just one more TV show (and by we I mean me; I don't want to implicate Mike) have been watching lately. It may have lost the listeners' choice episode poll last year, but Dionne Warwick won my heart anyway!
5) Banacek: 50 years ago tonight, Banacek entered the world as NBC aired the pilot, which also featured BOTNS favorite Madlyn "Fences" Rhue.
6) Don Giller: The nation breathed a collective sigh of relief this week when his channel update indicated he was hired as a consultant to the awesome official Letterman YouTube channel and that his own super-awesome unofficial YouTube channel would continue.
7) Hal Linden: We wish a very happy 91st birthday to star of stage and screen--and sometimes both, as in Night of 100 Stars--Hal Linden!
8) Superboy: The latest in the parade of Warner Brothers "This would be cool on HBO Max, but we're not doing anything with it, so at least we'll license it out" shows to hit Tubi TV is this syndicated 1988 series.
9) St. Patrick's Day: I didn't get a shamrock shake this year!
Hey, at least it's not Ed McMahon singing "Thanksgiving Day" again!
10) National Proposal Day: I would like to propose that NBC put Kojak on Peacock. Not that kind of proposal? Oh, yeah, I guess today is about this kind:
Posted by Rick Brooks at 12:00 PM