1) Jessica Walter: We salute the late great Walter, who won two Battys for her portrayal of Morgan le Fay in Dr. Strange. 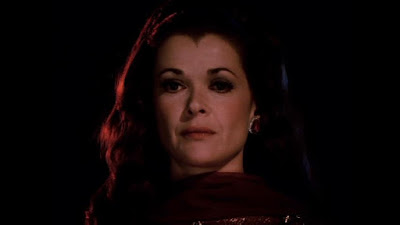 2) Leonard Nimoy: Speaking of Batty winners, Season 8 superstar Nimoy is getting a statue outside Boston's Museum of Science. Let's hope it's too big for Columbo to pick up and slam on his desk.

3) William Shatner: We can't let our guy Bill be overshadowed by Leonard, can we? Props to the living legend, who celebrated his 90th (!) birthday this week. Also, check out this cool article about one of his 1970s guest shots.

4) The Fall Guy: Decades has a weekend-long marathon because what better way to celebrate the arrival of Spring than by watching dozens of episodes of Fall?

5) Play It Again, Charlie Brown: You may be getting ready for the Easter Beagle, and don't you worry, sports fans, that special is making the list next weekend, but  tonight in 1971, CBS premiered this one, which centers on Schroeder! It doesn't appear that Apple Plus is going to show this one, but it is available on home video and can be found if you look around online.

6) Album Tracks: After seeing this great segment from this rock-oriented show that aired on NBC Owned & Operated stations, I want to see more! Check our pre-MTV Bob Pittman and Lee Masters here:

7) The 1980s "Showtime" Los Angeles Lakers: You may have known that HBO was producing a television  series based on the glamour team of the fantastic NBA Eighties, but did you know Michael Chiklis and Adrian Brody were slated to play Red Auerbach and Pat Riley? I just found out, and I can't wait to see this.

8) Betty Buckley: The former star of Eight Is Enough (and, OK, many other things) was on The Carson Podcast this week, and also, 40 years ago, the show spotlighted her (and Grant Goodeve) singing in a special epsiode as the family somehow had to do a telethon Joanie organized for "Unified Charities."

9) George Segal: R.I.P. The bulk of his TV series work came after our era, but he was a frequent presence on the small screen throughout his career. He starred in the short-lived 1987 series Take Five:

10) Richard Gilliand: Shout-out as well to the veteran actor known for shows like Designing Women.