1) Solid Gold: I shared this video in our Facebook group this week: An episode of the show co-hosted by Ol' Blue Eyes and also featuring Air Supply and Juice Newton!
The episode is a lot of fun, but it's odd seeing the Solid Gold Dancers do an ongoing countdown to Sinatra songs. And why have Joe Piscopo on to do his Sinatra shtick for a whole segment when the real Sinatra is already on the show?
2) NBC Let's All Be There: This pin I just got and posted about the other day fills me up with that NBC spirit: 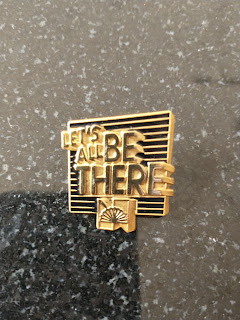 3) Going Ape!: Not TV, but this 1981 feature film starring several stars of Taxi was released on Blu-Ray this week.
Now, I don't want to spoil anyone's fun, but we have to consider the feelings of dumb animals, so I gotta ask: How was Tony Danza treated during the making of this movie?
4) Joe Montana: All the quarterback talk in the NFL playoffs this month made me think about my guy from the Eighties, Joe Cool. That Peacock docuseries got some publicity before it debuted, and then...no buzz whatsoever. Anyone seen it? Is it any good?
5) 1982 Golden Globes: The big TV winners at the ceremony 40 years ago tonight were MASH and Hill Street Blues, but the Mickster won for this:
6) Billy Crystal Comedy Hour: Also 40 years ago, NBC premiered this variety series (not "just" comedy!), which only lasted a month.
7) Phil Collins: The birthday boy (January 30, 1951) played Phil the Shill on Miami Vice and of course did a few other things in the Eighties as well.
8) Todd Bridges: He was announced as being part of the cast of Celebrity Big Brother 3, which may not sound like much, but, hey, he's still here. He was also great on the latest Live Before a Studio Audience.
9) Betty White: Her time in the spotlight continues with an NBC special tomorrow, and while you may think it's time to retire her form the top 10, don't you want to listen to Cher singing the theme to The Golden Girls?
Well, maybe not. But I put Betty at #9, not Cher.
10) R.I.P.: Peter Robbins and Morgan Stevens. Two men who had troubled lives. Here is a clip of Robbins, the original voice of Charlie Brown:
Posted by Rick Brooks at 6:00 AM