In this week's Top Ten, we marked the 40th anniversary of the premiere of One of the Boys, a flop starring Mickey Rooney and a young Nathan Lane and Dana Carvey. I can't let it go, though! Sadly, the only full episode online that I can find is this one:

Watching it is almost a disappointment. It's not laughable. It's not over-the-top embarrassing. It's just...bad.  I hoped to see more evidence that, "Ah, yes, here is where we can tell The Mickster was a jerk to Carvey."

But instead it just seems like the whole thing falls flat. It's amazing that two prolific sitcom writers (Saul Turtletaub and Bernie Orenstein) could create a show so devoid of jokes--and I mean attempts at jokes, let alone good jokes.

Here is what TV Guide said in 2002 when it called this one of the 50 Worst Shows of All Time: 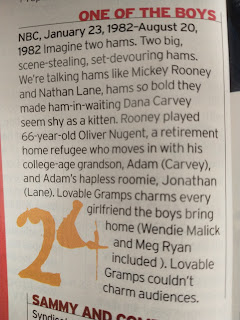 Email ThisBlogThis!Share to TwitterShare to FacebookShare to Pinterest
Labels: One of the Boys, What We Saw