I haven't been a big Mod Squad watcher, and in fact I don't remember it even being on much when I was growing up. TV Land showed it for a while, and I saw some of it when Aspire ran it a few years back, but the series has a relatively low profile these days.

This is a cool-looking package, though: 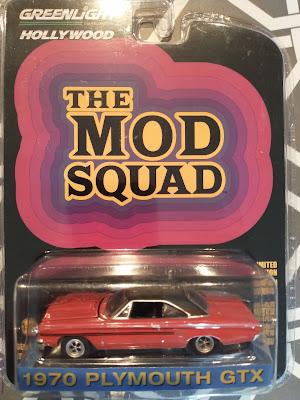 In fact, this collectible is about 75% packaging! I still like it, though. Who can resist that iconic 1970 Plymouth GTX?

OK, I admit, as neither a Mod Squad guy nor a car guy, I can't tell you much about the Plymouth GTX, but it's up on my wall and makes a nice affordable TV display item.

The series has been available complete on DVD for some time, but it hasn't hit a major streaming site. Actually, I did try to watch an episode on YouTube several months ago, bookmarked it, and then found it was yanked.