40 years ago tonight, CBS premiered Mr. Merlin, a show set in present-day San Francisco and featuring Barnard Hughes as the legendary wizard training a replacement so he can retire. In the meantime, he's running an auto garage as a civilian. Why not?
Up against The Greatest American Hero and Real People, the series didn't do too well, and it was moved to Monday nights at midseason. There is was up against...That's Incredible.
Mr. Merlin lasted but a single season and was not well regarded, but like many other shows in the Sony vaults, it is now streaming on Crackle. I watched the pilot last night, and there's a certain charm to it. There aren't a lot of great laughs, and it's all a bit too silly, but, hey, they tried. It's an 8:00 sitcom aimed at a younger crowd.
Also in the cast are Elaine Joyce, glammed up (maybe a bit more than you'd think for an 8:00 sitcom) as "Alexandria," who passes along "their" messages to Merlin and vice versa. It's not clear at first who "they" are, but they are powerful. Clark Brandon, also known as Jo's boyfriend Eddie on Facts of Life, is the dopey apprentice Zac, and remember Throb? Jonathan Prince from that syndicated sitcom is Zac's pal Leo. 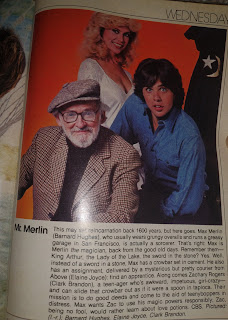