40 years ago tonight, NBC premiered the series version of its earlier (in fact, only two weeks earlier) TV movie Sidney Shorr: A Girl's Best Friend, which itself was adapted from Marilyn Cantor Baker's short story.  The show lasted only two seasons.
Swoosie Kurtz replaced Lorna Patterson in the series, and there was another big change: Shorr, openly gay in the movie, did not discuss his sexuality in the show, reportedly because NBC got preemptive complaints when the premise was announced.
Notice how TV Guide describes the character in its preview; instead of using the wink-wink "confirmed bachelor" business, this piece is open about Sidney's orientation, some of the skittish reaction, and NBC's strategy: 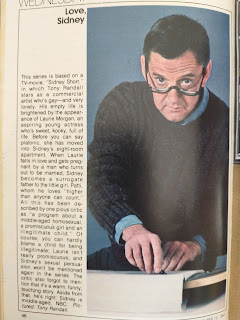