This Day in TV History: DVP and baton twirlers (not together)

40 years ago tonight, TV viewers received an interesting assortment of Sunday evening programming, including a Halloween-set episode of Alice and a Trapper John M.D. episode titled "Hate Is Enough." Not having seen the latter, I can only wonder if that pun is appropriate for a story involving the KKK.
The most interesting programs are on the other networks. ABC starts at 7:00 with a special, Whatever Became Of...  Our old friend Dick Van Patten hosts this update of multiple celebrities from the recent past. This picture is from Vincent Terrace's Television Specials: 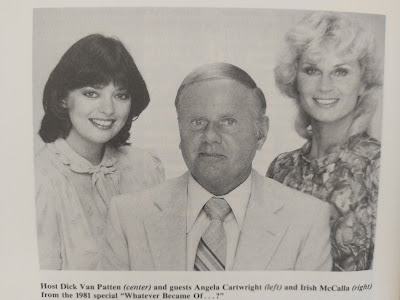 Other stars featured include The Monkees, Danny Bonaduce, Spanky McFarland, and Brigitte Bardot. DVP welcomes guests like Donna Dixon, Phyllis Diller, and his partner in crime Adam Rich from Hate is En--er, Eight Is Enough. The show has a theme song by Bobby Sherman and is a Dick Clark production, and somehow that doesn't surprise me one iota.
NBC's main attraction is made-for-TV movie Twirl, a saga about baton twirling in Texas and the pressured relationship between two girls (Lisa Whelchel and Erin Moran).  The complete movie is easy to find online, but here's a rather suggestive promo for a 1984 rerun:
How far will they go? How far WILL THEIR PARENTS GO?
Posted by Rick Brooks at 6:00 AM