This Day in TV History: Aquacade at Acapulco

50 years ago tonight, CBS started its Wednesday night lineup with a 60-minute variety special taped on location: Aquacade at Acapulco! It was taped, of course, in Boise, Idaho.
No, it was in Mexico, and it featured cliff diving, swimming, and "regular" diving along with comedy and music. The impressive cast includes host Tony Randall, Stiller and Meara, Mel Brooks, and BOTNS favorite Ed McMahon. Hopefully Ed did this one in a business suit and not a bathing suit.
You know who is NOT featured? Aquaman! Even in 1972, Arthur Curry was getting snubbed if not outright mocked by the biz.
The Paley Center's listing says this aired at 7:00. If you want to see this, you might have to go to the Paley. Also in the listing is this detail of one of the sketches. a comedy sketch featuring McMahon interviewing Mel Brooks, playing an ex-Nazi pretending to be an Argentinian archaeologist
Imagine if they did it the other way around!
This site has the following photo for sale: 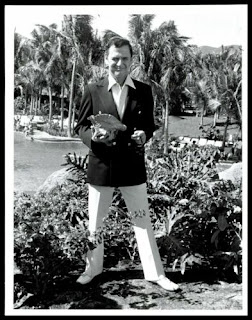