12 Days of Christmas Watching 2022 #11: I'm gonna watch a Christmas SNL one way or another, dadblast it!

I was determined to see a new-to-me (or at least in the last 25 years or so) Christmas episode of Saturday Night Live this season. I had to step outside our BOTNS time frame, and even then I ended up seeing a notorious bomb of episode, one that didn't have a lot of Christmas atmosphere, anyway!
I tried first with a 1984 Season 11 episode from December with Jay Leno. Well, Peacock says it is from December 22, 1986, but in fact the airdate is FEBRUARY 22.  No wonder I didn't see a lot of Christmas!
I didn't see a lot of anything in the episode because Peacock edits it to a ridiculous 22 minutes. The cold opening is gone. The monologue is there. Weekend Update is (for the most part) there with the first appearance of A. Whitney Brown. There is an amusing sketch with the observational comedy guys ("I mean, HEY!").
That's about it! Missing are both Neville Brothers performances. No surprise there, but also cut are 6 sketches not counting the cold open, including one with Randy Quaid as Lyle Alzado! What a tragedy! This sample of the Quaid/Anthony Michael Hall/Robert Downey Jr. season is barely there.
So I time-jumped to 1994 and Season 20's ninth episode, starring George Foreman and Hole. This one actually DID air December 17, 1994, so, yay, Peacock, for getting that right. The stage is decorated.  The first sketch has the Clintons in front of a Christmas tree. 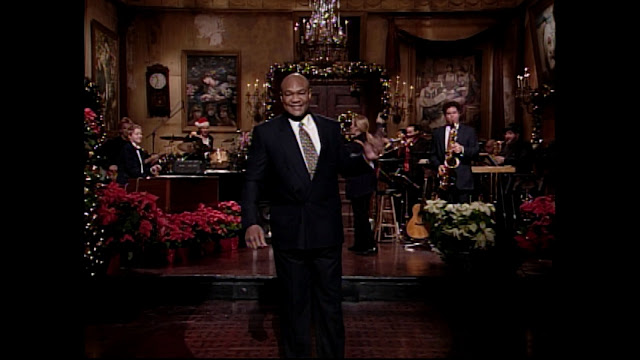 That's as far as it goes, though, and not only is this a terrible episode, but Peacock cuts the most interesting bad segments and leaves us with barely over a half-hour. Missing are Foreman going back in time to box Adolf Hitler and Foreman as the Hulk ripping on the writers for making lame sketches. I'd rather see either of those than what is left, even the sketch with my guy Chris Elliott getting George to read a bedtime story (I liked parts of that, actually).
I won't go into detail, but it starts poorly and doesn't improve much. The opener has Bill and Hillary--so Phil Hartman and Jan Hooks, right? WRONG! They are not here anymore. It's Michael McKean--great but miscast here--and Janeane Garafolo, who is ALL over this episode (I mean like in almost every segment that exists in this version) and ineffective throughout. If your kids ever ask you why she was "a thing" in the Nineties, this is not good evidence.
I love Big George and was a huge fan when he won the Heavyweight boxing crown in 1994, but he was much better as a broadcaster on HBO later. This is not his best work.
NOTE: I later saw that the Leno episode was situated between two other episodes that did have proper dating, so it was obvious looking at the whole season that it was out of place. Also, Season 11 did have an actual Christmas episode with Terri Garr. So I missed out on that...all 24 minutes of it. Peacock, you deserve a spot on the Naughty List. You can get off it by adding Quincy in January.
We cannot end this season of watching on such a sour note. We need something truly Christmasy to get this SNL debacle out of our chimneys, something that will give us surefire entertainment and help us maintain those holiday smiles. Yes, we have to turn to one of the heavy hitters, and it just so happens it has a Christmas episode I have not seen. Be here tomorrow as I unwrap the 12th present and close out our 12 Days of Watching!
(I wouldn't mind seeing Randy Quiad as Lyle Alzado as a stocking stuffer)
Posted by Rick Brooks at 6:00 AM