A game show brought me some of the best Christmas watching of the season! We talked about Sale of the Century in our game show episode back in , and there we explained what made it such a good series. This episode from December 23, 1988 takes it up a notch by adding CHRISTMAS to the mix!
\
(Thanks to Sale of the Century Archives for posting the original episode as aired on NBC!)
The producers went all out here. I bet they taped this in, what, August at the latest, but you would never know it. It's not just decorating the set, though it looks lovely, and not just giving Summer Bartholomew a seasonal dress, though she looks lovely. Every question of the trivia-based game is about the holiday--Santa trivia, prominent retailer trivia, toy trivia, and more!
Even the prizes are themed, including a trip to Santa Claus, Indiana. That may not sound like much, but when Jim Perry throws in hundreds of dollars in spending money and slashes the price to a dollar--well, that's a bargain! It's like a half-hour yule log...only instead of a piece of wood crackling, there are human beings competing for cash and prizes. OK, it's not like a yule log at all except that watching it is awesome.
Everyone is in a good mood here. Defending champion Angela is excited to try to go for the car again (and a La Petite grand piano today--hey, how can a grand piano be petite?). Jeff is introduced as "a man of the cloth," and the reveal that his family has had a clothing business for several generations brings the kind of game show jovial reactions you expect.
And then there's the wine taster Ursula, giving off slight "Andrea Zuckerman after 3 glasses of spiked punch at the off-site holiday party" vibes. She is into it all right, almost too much, but it works for the game because we have the right host in charge.
That host, my friends, is Jim Perry, who gets an exciting game here to show off his skills. He does it all here, from reacting with that appropriate jocularity to the contestants to controlling the game to even sweetening the pot with a little cash when the lead contestant is pondering spending game dollars on a prize. And as the show often has him do, he even throws to break at one point by relating a Bob Hope joke about Gerald Ford golfing.
I always thought Perry was one oft he most underrated hosts in game show history, and he backs me up in this one. Check out the way he explains a mild "situation" that occurs in the lightning round to the affected contestant: subtle but definitive, and not intrusive on the game. A funny moment occurs halfway through the show when Bartholomew forgets a prop tied to a bargain skit, and Perry reacts with aplomb. It's another outstanding performance by a true pro. 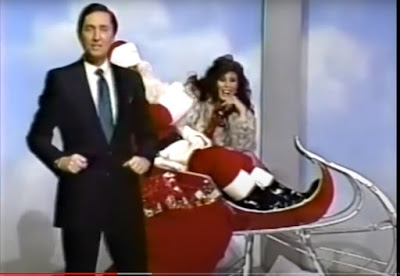 All this adds up to a tremendous Christmas episode, and let me tell you one other thing: The game itself is a thriller. Sale is not as difficult as Jeopardy!, but it provides exciting game play with its speed and the format that encourages close scores. I won't spoil the outcome, but this contest is up for grabs until the very end.
Don't take my word for it, though. Just look at the face of Jeff and his clear elation at getting a Fame Game (sit down, Mike) win and earning not the $15 card that would bring him a huge lead in the game, but an assortment of...lamps. If this doesn't scream, "Ho ho ho and all that jazz," I don't know what does: Email ThisBlogThis!Share to TwitterShare to FacebookShare to Pinterest
Labels: 12 Days of Watching, Christmas, Game Shows, Sale of the Century