12 Days of Christmas Watching 2022 Day #9: Donny and Marie and a cast of thousands

Are there too darn many Osmonds? I am not commenting on their religion, their family planning, or anything. I am just observing this 1979 Donny and Marie Christmas special and thinking, man, there are Osmonds all over the place!
The show is built around the stars Donny and Marie, of course, but then you get the B-teamers like aspiring teen star Jimmy (I confess, when he first came out on stage, partly due to the camera angle, partly due to the age of the source video, and partly due to the hairdo, I wondered if he was Billie Jean King). The other Osmond boys show up, too, and dance and sing and even act and tell jokes. We're talking Wayne and, uh...Osgood Osmond. Mordecai...Biff? I'm lost.
Then you throw in the grandkids like little Travis and Amy and...Spot? Again, I am lost. It doesn't help when we see the Osmond wives. Then some random old people come out on stage, and I think they are the Osmond parents, but, heck, I don't know for sure. I guess in 1977 everyone knew everyone in this family. Many see this kind of scene and think family is what Christmas is all about. I think, wow, they can't even face each other in one living room but need two giant ones side by side. 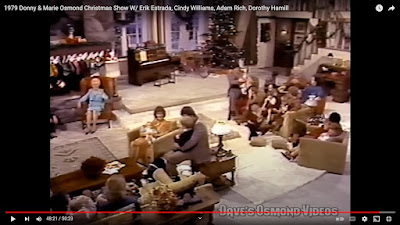 I don't have to tell you that the Osmonds do a lot of holiday caroling and whatnot. They get help from an array of guest stars like Erik Estrada, who enters on a motorcycle and brings his 1977 charisma if not a particular aptitude for singing "Let It Snow." He does it anyway, though, dueting with Marie in one of the show's standout numbers. Why does it stand out? Christmas is only several days away, and I am practicing goodwill!
Other guest stars come by to help out, too. Cindy Williams is game enough to appear in multiple sketches. Dorothy Hamill ice-skates all over the place, sometimes as a backdrop for a musical number. My favorite is Adam Rich, who gets a show-long storyline about assembling props for a "12 Days of Christmas" number. I am going to give away my favorite joke here. After coming up with ridiculous substitutes for items 1-8, Gunther Osmond (I think) asks where the rest of them are, and Adam says, "Where I come from, eight is ENOUGH!"
I should have seen that one coming, but it got me, and I had a genuine laugh.
I'm having a little fun with this special (though I really did enjoy that Eight Is Enough gag), but it's a great watch. The Osmonds may not be everyone's cup of nog these days, but they have undeniable charisma--some more than others, but Donny and Marie are big time here in 1979--and you get great Christmas atmosphere and a host of carols. I enjoyed Marie's wistful yet wholesome rendition of "Blue Christmas."
It's all served up with that family-friendly aura that doesn't mean only "wholesome" content, but actually depicts a large extended family celebrating together. Everyone seems to enjoy each other's company, with a few mild familial jabs here and there all in fun. It's a pleasant sight, and I am not going to research and verify all these wives and kids pictured above stayed together and remained happy forever. I am going to let it be so, at least through the holiday season. This really is the kind of show they don't make anymore, at least not in a sincere way, and I appreciate that we can enjoy it even on YouTube (Thanks, Dave's Osmonds Videos for the upload).
Posted by Rick Brooks at 6:00 AM

Email ThisBlogThis!Share to TwitterShare to FacebookShare to Pinterest
Labels: 12 Days of Watching, Christmas, Donny and Marie