This Day in TV History: Confessions of a Lady Cop on NBC

This day in 1980, the Police Story franchise ended on NBC with a two-hour TV movie. I have never seen this movie, but I can guarantee you it's not as exciting as its title indicates. On this day in TV history, NBC gave the world Confessions of a Lady Cop. 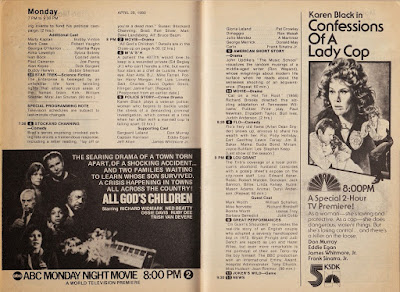 Credit to to Newspapers.com and Garage Sale Finds for the scans.

Police Story began March 20, 1973 as a TV movie, then aired on NBC as an anthology before hanging on as several TV movies. This was the finale...until it came back 7 years later!  Police Story: The Freeway Killings featured Angie Dickinson, Ben Gazarra, Richard Crenna, Tony Lo Bianco, and many more TV vets.  The show was revived yet again in 1988 when ABC reshot screenplays from the original series run for programming during the writers' strike.

All in all, Police Story--with its diversity of storylines and performers--may be one of the most underappreciated but with interesting production history series of the era!
Posted by Rick Brooks at 6:00 AM