1) Brian Dennehy: R.I.P. to the real Star in the Family, who passed away this week right after we were talking about him in our Facebook group. Maybe someday we'll get that spinoff Dennehy podcast going.


2) Supertrain: Speaking of our Facebook group, there is growing sentiment we should cover this series on the podcast, and if it's not growing now, I plan to make sure it does:

3) Celebrity Challenge of the Sexes V: This special aired on this day 40 years ago. yes, there were 4 of these before this one.  Here is a summary of the series. 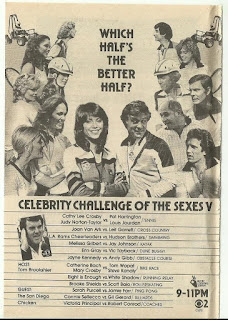 I'm especially intrigued by the Eight Is Enough vs. White Shadow event!

4) Hugh O'Brian: happy birthday to the late star of one of our favorites, Search! Put a candle on a bit of peach melba

5) Tales of the Gold Monkey: It's on the semi-problematic list (just be glad you don't know why if you don't), but as we said in this week's bonus episode, it would have made for some cool toys back when it aired.

6) Peacock: This streaming service is rumored to have launched this week with old favorites (and season 7 subjects)  like Miami Vice and Murder She Wrote, but I don't know of anybody who actually has it.

7) Saul Turtletaub: R.I.P. to one of the creative forces behind Sanford and Son and What's Happening! because of course "Saul Turtletaub" had his finger on the pulse!

9) Up with People: Hey, someone did the "favor" of posting the 1986 Super Bowl Halftime show. After this, Up with People was not invited back, as the NFL went with a hipper group next year: Mickey Rooney, George Burns, and some college marching bands.

10) Howard Finkel: R.I.P. to one of the voices of my childhood, the great WWF ring announcer.